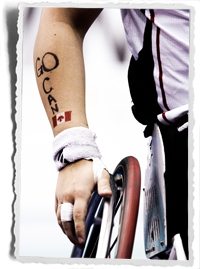 Twenty-one athletes will compete for 12 roster spots at the Canadian Women’s National Team selection camp from January 6-10, 2014. The athletes are vying for the opportunity to represent Team Canada on home soil at the 2014 Women’s World Wheelchair Basketball Championship from June 20-28, 2014 at the Mattamy Athletic Centre in Toronto, Ont.

Eighteen athletes will participate in the selection camp for the Canadian Men’s National Team from January 13-16, 2014 with the hope of securing one of the 12 roster spots on the team.

The athletes attending selection camp are: (athletes’ city of residence indicated / athletes with Paralympic Games experience denoted with a *)

The Senior Men’s National Team went undefeated at the London 2012 Paralympics to capture their third gold medal in four Paralympic Games. It is the latest accomplishment in a sport dynasty that has placed them on the podium at four consecutive Paralympics and at five of the last six World Championships.