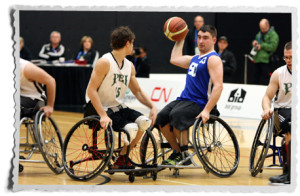 Team B.C. went 1-1 on the day, starting things off with a victory over Manitoba before falling in a thriller to Team P.E.I to close out the day.

“We started off the day a bit shaky but we settled down and found our rhythm,” said Team B.C. head coach Marni Abbott-Peter. “We improved in our games today and we will continue to get better as we progress throughout the tournament.”

Team B.C. opened the competition in decisive fashion by posting a 61-29 win over Manitoba in front of a divided, but rocking crowd. The host team took the early lead over a young Manitoba side and never relinquished the advantage on the scoreboard. B.C. used its depth to score 35 points from the bench. Chilliwack natives Tanner Scott and Ben Hagkull were the top point producers for Team B.C. with 18 and 10 points, respectively. Kail McCluskey, of Morris, Man., led the Team Toba herd with 14 points, while teammate and Winnipeg native Owen Rigby dropped 12 points.

Saskatchewan and Ontario battled it out in one of the most heated matches of the opening day. A back-and-forth first half saw the teams deadlocked in a 19-19 draw at halftime. Saskatchewan pulled away in the third quarter by converting on its opportunities and outscoring Ontario 20-6. Saskatoon native Jared Sajtos dropped a game-high 22 points and collected 14 rebounds to earn the double-double for Saskatchewan. Eric Voss, of St. Mary’s, Ont., was the top point producer for Ontario with 8 points.

Team Quebec picked up its seventeenth consecutive Canada Games victory with a 74-40 win over New Brunswick at the 2015 Canada Games. The team from la Belle Province outscored Team New Brunswick 24-2 in the opening quarter and never looked back. Benjamin Palmer, of Laval, paced the floor with 28 points and 14 assists for Quebec. Jacob Fudge, of Saint John, led all Team NB players with 20 points. Quebec is the three-time defending champion and has not lost a match at the Canada Games since 1999.

Team P.E.I. defeated Team B.C. in a thrilling finale on opening day. Team P.E.I. held the 29-22 advantage at halftime, but Team B.C. chipped away at the lead in the third quarter. Prince George native Avril Harris dropped a three-pointer at the buzzer to end the third quarter and send Team B.C. into the final frame within four points. The momentum carried over into the final quarter for Team B.C. as the teams exchanged the lead, but ultimately the comeback fell just short. Jeremy Watts, of Charlottetown, P.E.I., and Liam Hickey, of St. John’s, Nfld., were the offensive catalysts for Team P.E.I. with 29 and 27 points, respectively. Ben Hagkull, of Chilliwack, B.C., led Team B.C. with 12 points.