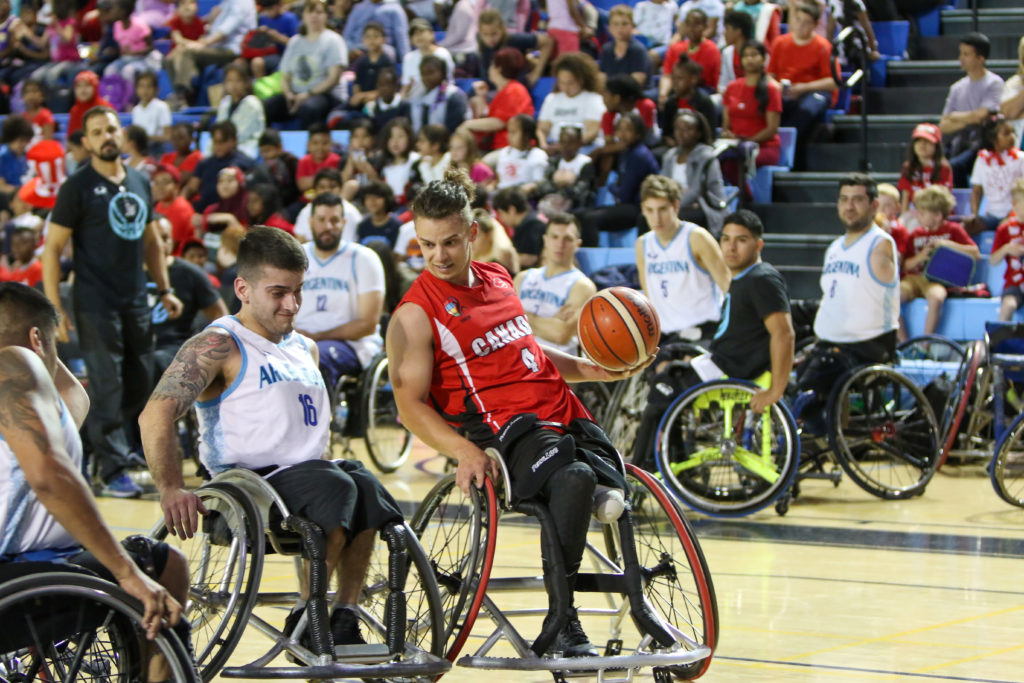 Team Canada men’s national team came out victorious 60-55 over Argentina in the exhibition feature game on June 19 at the National Training Centre in the Parapan American Sports Centre in Toronto. Meanwhile, the women’s national team beat the Netherlands 54-52 a few days earlier on June 13 at the same location.

Pat Anderson and Nik Goncin led Canada in scoring with 15 and 12 points respectively in the game.

“It was a great atmosphere,” Anderson said. “One which we don’t get to play in too often with the noise and the distractions, it was a great test…to assess where we’re at and communicate and work together under intense circumstances.”

The game started off with both teams missing shots but Canada broke through to open the scoring. Tyler Miller found David Eng to make it 2-0. Argentina responded with free throws to take the lead back before the home side hit back-to-back jumpers (courtesy of Bo Hedges and Nik Goncin) to take a 6-4 lead.

It was Canada’s first game in a while, and the first in a series of exhibition matches. “There’s a little extra nerves and sort of looking around at each other sometimes but I think we, once the early parts of the game, the jitters were through, we were able to channel that energy from the crowd, the kids and settle into the game,” Anderson noted.

Adrian Perez started off Argentina on the strong foot in the second quarter with a layup off a steal but Lee Melymick responded with a basket. Canada started to cut into the Argentina lead with a Goncin field goal but weren’t able to stop them from scoring.

Hedges hit from just inside the three-point line to cut the lead to 27-23 late in the quarter, leading Argentina into a timeout. Pat Anderson checked into the game afterwards and quickly drew a foul. He hit one of two free throws before hitting a three to tie the game. However, Argentina would take a 29-27 edge into halftime with Villafane leading all scorers with 11 points.

Anderson said Canada hit their stride at the end of the first half.

“Coming off the bench is a little bit strange but a good opportunity for me to practice that and for me to understand what other guys, who do come off the bench more often, what they’re faced with and how they prepare and how they contribute,” he said. “It’s a good experience but I was itching to get out there.” 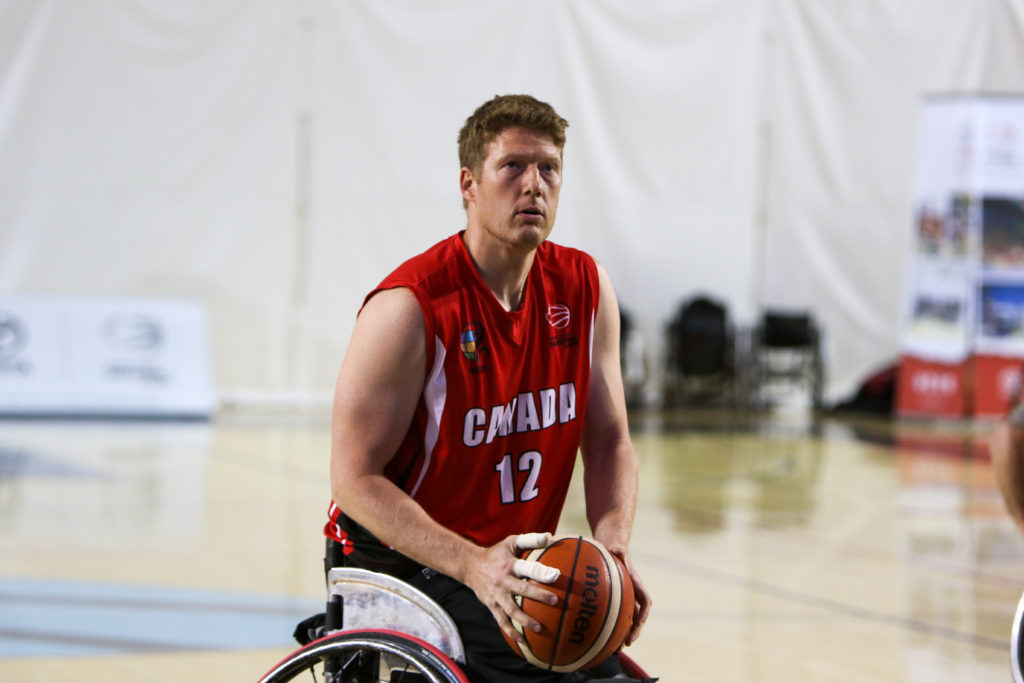 Canada went on a run to start the second half, taking a 37-31 lead as Anderson added to his scoring totals. Eng scored off a drive to the basket to make 41-33. Canada continued to get scoring throughout the quarter as Deion Green scored his first points of the game. They took a 48-40 lead into the fourth quarter.

The score stayed at 48-40 early in fourth as both teams made defensive stops before Anderson got to the free throw line and hit both. Joel Gabas grabbed an offensive rebound to make it 53-44 but Goncin responded with an offensive rebound of his own late in the game. He continued his scoring streak with a jumper and the foul. Captain Alolfo Berdun hit a late three as Argentina made a last-minute push but it wasn’t enough.

“I think we look like a hungry team, which is not surprising coming off a 12th place finish [at Worlds] but it really for us [was] a tactical challenge,” Anderson said.

“Every team, every opponent presents new challenges,” he said. “We can’t take any games off because of the opportunity to practice the Xs and Os.”

“We have to approach every game that way whether there are 1000 people here or one person here,” he added. 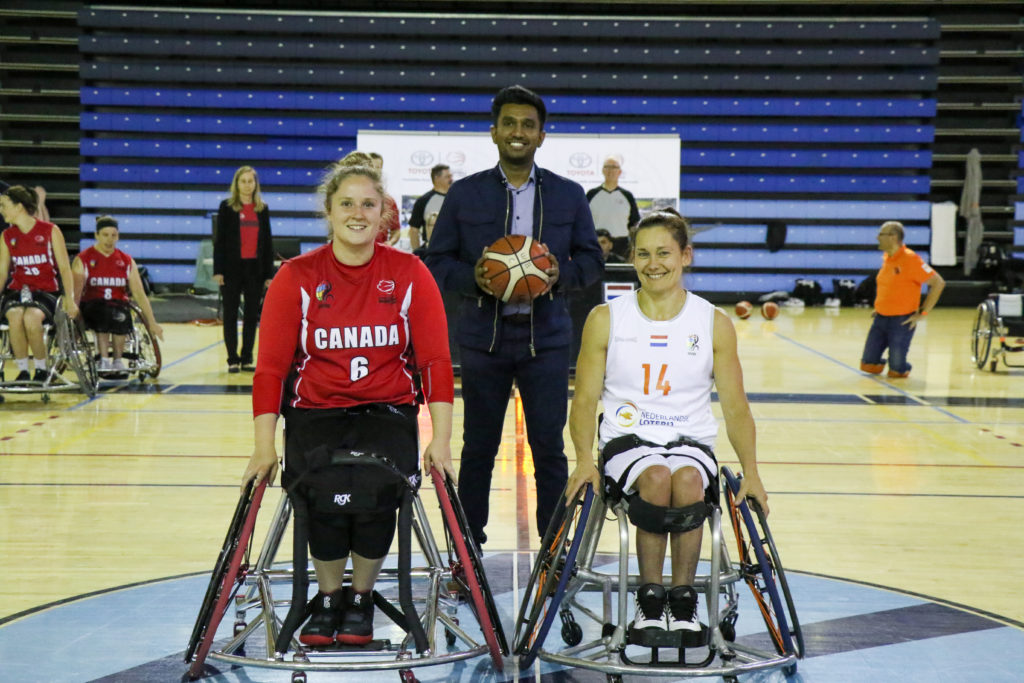 Canada women’s national team took down the defending European and World champion Netherlands 54-52 on June 13 at the National Training Centre at the Parapan American Sports Centre in Toronto. This was after losing to the Netherlands in the quarterfinals of the 2016 Paralympics and in the group stage of the 2018 World Championships.

Canada built up a lead throughout the game, which proved crucial as Netherlands made a 13-4 run late in the game. However, Canada’s defence withstood it and prevailed with the victory.

Canada got spread out scoring with Arinn Young leading the way with 13 points. Cindy Ouellet added 10 points while Kady Dandeneau chipped in seven.

Canada’s men’s team takes on the Netherlands later today at 5 p.m. ET. They also face off against Argentina and the Netherlands a number of times between June 20 and June 25th.

The women’s team will be competing in the USA tournament in Georgetown, Kentucky from July 11-17. Both teams will continue to compete in exhibition games in preparation for the 2019 Parapan American games in Lima, Peru from Aug. 23 to Sept. 1.