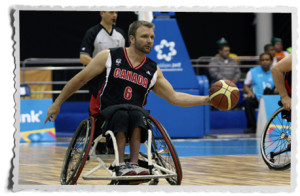 (Toronto, Ont.) A strong performance in the second half of their matchup against Americas zone rival Argentina allowed Team Canada to outlast their opponent 56-45 and improve their record to 2-0 at the 2015 Americas Wheelchair Basketball Challenge.

Canada is hosting Americas zone rivals Argentina, Brazil, and the USA at the Mattamy Athletic Centre March 22-26th for the friendly warm-up tournament that offers a sneak peak at the top competitors gearing up for the Toronto 2015 Pan/Parapan Am Games.

The score was deadlocked at 25-25 going into halftime before Canada outscored Argentina 31-20 in the final two quarters of the game to pull away with things and improve their record to 2-0. Canada spread the scoring around amongst eight different teammates with Bo Hedges, 15 points, and David Eng, 9 points, once again leading the way. Nik Goncin rounded out his contributions with a three-pointer in the fourth quarter to also finish in double-digit scoring with 11 points.

For the second night in a row Argentina relied heavily on Daniel Copa for their offense. He scored a game-high 18 points.

Team USA also captured their second win of the tournament by defeating Brazil 81-57. Jared Arembula and Carter Arey had impressive games with 19 and 18 points respectively. Anderson Ferreira scored 11 of his team-high 13 points in the third quarter for Brazil in the loss.

Team Canada has three games remaining in the tournament. First up is a rematch against Brazil, who they beat 76-64 in their opening game, on Tuesday March 24th starting at 8:30 p.m. ET. Then Argentina will have a chance at redemption against Canada on Wednesday March 25th at 6:15 p.m. ET. Canada will wrap up their tournament against the USA on Thursday March 26th at 6:15 p.m. ET.

Interviews with Team Canada athletes and coaches can be scheduled by contacting Jody Kingsbury at 613-851-2337 or jkingsbury@wheelchairbasketball.ca.