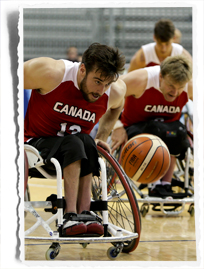 The USA improved to 2-0 at the Toronto Challenge on Saturday night, while the Canadians picked up their first win in the men’s wheelchair basketball competition at the Mattamy Athletic Centre.

Canada and Turkey began the second day of exhibition games with a tight match. Turkey held the lead throughout the game until the Canadians found a final push to take the lead in the last minute of the fourth quarter, bringing the game into overtime. Canada ultimately pulled out ahead claiming a 71-68 win with Nik Goncin producing 25 points for the hometown team while Ozgar Gurbulak paced the Turkey offense with 17 points.

In the second match of the night the United States outlasted Great Britain for a 57-49 win. Matt Scott led American players with 13 points and Great Britain’s Simon Munn led his team with 16 points.

Turkey will take on the undefeated United States at 6:15 p.m. ET on Sunday, while Canada and Great Britain will tip off at 8:15 p.m. ET. Action continues through to Tuesday at the Mattamy Athletic Centre. All games are open to the public.