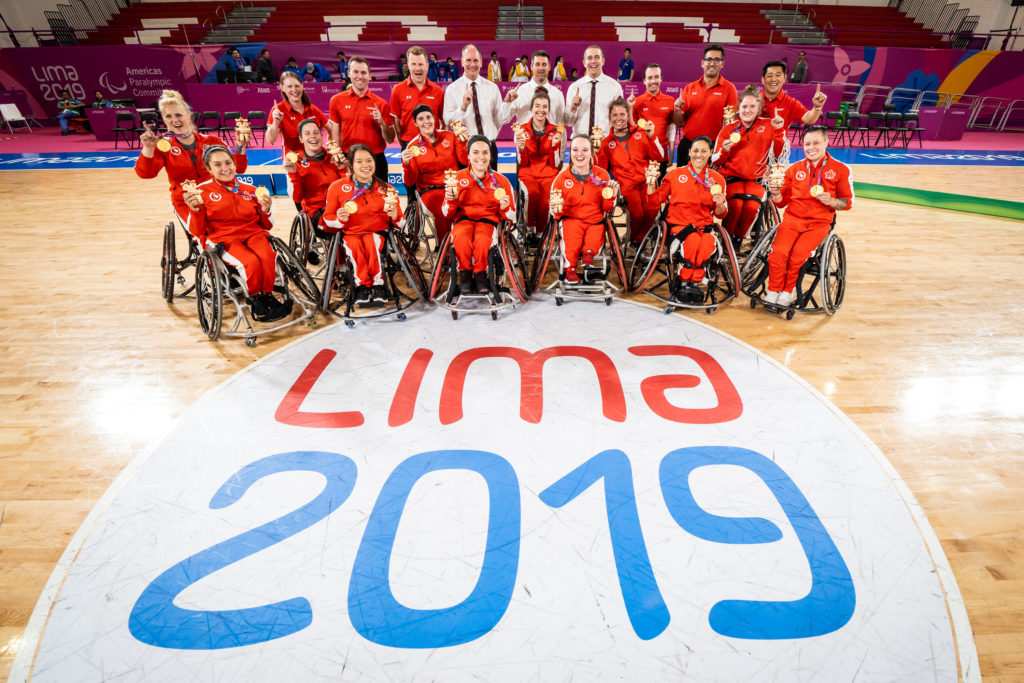 (August 30, 2019 – LIMA, PERU) It was a game of inches with Canada emerging victorious to seize gold in women’s wheelchair basketball at the Lima 2019 Parapan American Games. In a back-and-forth battle that saw six lead changes, and the score tied ten times, the Canadians saved their best for last outscoring the USA by eight points in the fourth quarter to triumph 67-64 over their southern neighbour.

Arinn Young of Legal, Alta. and Kady Dandeneau of Pender Island, B.C. torched the States for a combined 45 points. With 25 points, 10 rebounds, and 10 assists, Dandeneau notched the first triple-double ever for Canada at the Games. Young tallied a double-double of her own with 20 points and 10 rebounds. She finished tops in the tournament with 122 total points and averaged 24.4 points per game.

“These are the moments that every athlete dreams of. All the time you put in training, all those long hours in the gym all the pain from lifting or whatever it is your doing, this is the moment that makes it all worth it. Being able to play in that type of game is the greatest. That is what you worked for as an athlete. To be able to get there and achieve your goal, to get the gold medal. There is just no better feeling,” said Dandeneau.

“It feels unbelievable. Words can’t describe this moment. I just know that I’ll be chasing after it in Tokyo, that’s for sure,” said Young.

“The team chemistry this group of ladies has gotten so close together. This win just feels really good for everyone and that’s what I’m taking away from this tournament. All the memories we got together from it,” added Young.

It was the USA who took control of the game early on. Following an 8-0 run in the first quarter, Canada trailed 16-11 after ten minutes. The States shot 50% from the field and pulled down 11 rebounds compared to Canada’s 36% accuracy and five rebounds going into the second quarter.

The Americans increased the deficit to nine points before Young and Dandeneau streaked in on a 2-on-1 rush that led to the USA’s Rose Hollermann taking an unsportsmanlike foul. First Dandeneau made good on both free-throws and then with the ball back in Canadian hands for the in-bound, Steeves followed up by cashing in two more points. It was all part of a 6-0 Canada scoring run that marked a huge momentum swing in the game.

Canada brought the game back within a single point (26-25) and forced the USA to take a timeout. The teams exchanged baskets a few more times before half. With 40 seconds remaining on the clock in the second quarter Dandeneau made good on the hoop and harm to give Canada a short-lived 31-30 lead. However, the USA regained a sliver of a lead 32-31 midway through the game.

Shortly after the start of the third quarter, an unforced error gave Canada the ball on the baseline. Dandeneau delivered a dagger from beyond the arc that counted for three and put Canada ahead 38-36. Moments later Young threated the needle with a pass through two defenders to Dandeneau under the basket and she put the Canucks up 44-40 (two of 40 points Canada scored from the paint in the game).

Back stormed the Americans again on another 8-0 run that was finally cut short by a second unsportsmanlike foul against the USA. Canada went 6-for-8 from the charity strip through three quarters, but trailed 52-47 going into the final frame.

Early in the fourth quarter it was Young‘s turn to deliver a critical three-pointer that knotted the score at 52. Not long after that the Canadian bench absolutely erupted when Dandeneau drained her second three-pointer of the game and put Canada up 63-53 with 3:01 left in the game.

The USA had no answer for Dandeneau down the stretch. Her heroics continued with 38.8 seconds left in the game she beat the shot clock to put Canada up 66-62. Then, with just 12.2 seconds to go she iced the game with a free-throw.

“We had a job to do and we got it done, I just think it was a really great team performance. I’m so happy with the result and think that we took it to them Canadian style. We didn’t quit and all the work paid off in the end,” said Young.

“From everyone on the bench to everyone on the floor, that continuous support and great team chemistry that we have been working really hard to build is what I will take away from these Games. I think that is my favourite part, and I think that is what was missing for us last summer. This team has really stepped up and come together and it shows. Now we have results. This summer was a huge success and we will continue to build on it for Tokyo,” said Dandeneau.” 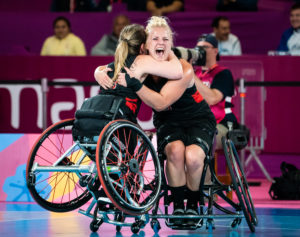 The Parapan Am tournament serves as the direct qualifier for wheelchair basketball to the 2020 Tokyo Paralympic Games. Both Canada and the USA, along with Brazil, who won bronze in Lima, have qualified for next year’s Paralympic on the women’s side.

“I think that is a really great experience and opportunity for everyone to get a taste of what it’s like on the big stage. Tokyo is going to be a whole other story and we are going to continue to build on this. It’s a great example of what this team is capable of and we can go so much further. So, I’m really excited for this coming year,” said Dandeneau.

On the men’s side both Canada and USA also qualified for Tokyo. The two teams will play for Parapan Am gold August 31 at 6pm ET.

Fans in Canada can tune in to watch the livestream of both games via the Canadian Paralympic Committee Facebook page, CBC Gem streaming service, cbcsports.ca, the CBC Sports app for iOS and Android devices, as well as the Radio-Canada Sports app and radio-canada.ca/sports.