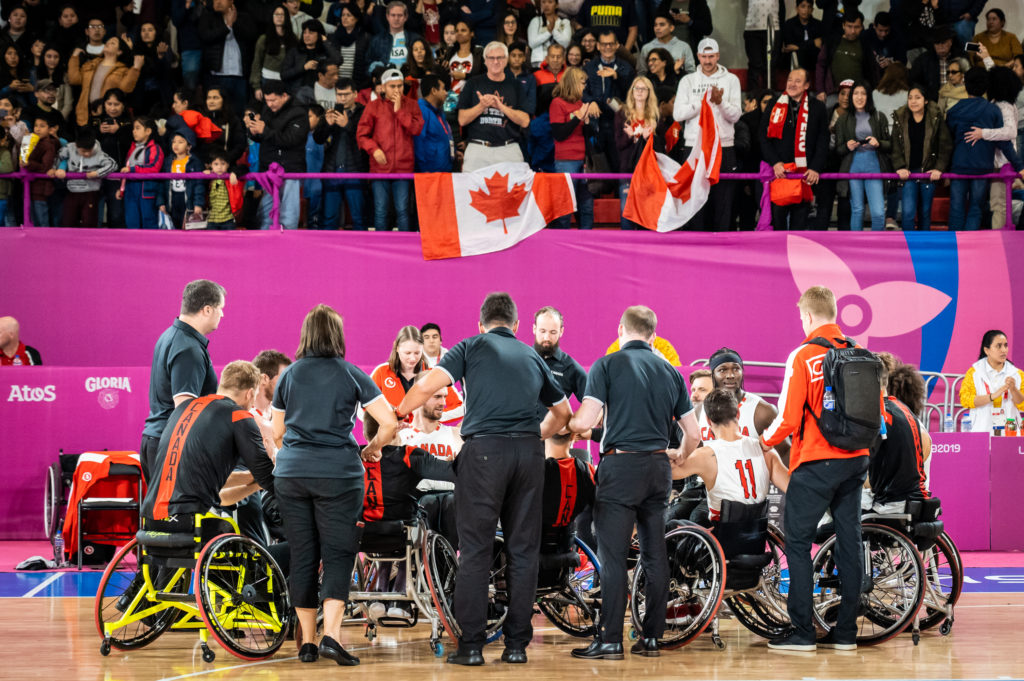 (August 30, 2019 – LIMA, PERU) With their tickets punched for the Tokyo 2020 Paralympic Games, the undefeated Canadian Men’s Wheelchair Basketball Team will fight for gold at the Lima 2019 Parapan American Games after knocking out Colombia in their semifinal bout. The Canadian attack was spread out with a combination of four players hitting double-digit scoring in the contest that ended 62-42 and clinched a sixth consecutive podium appearance for Canada at the Games.

Once again Patrick Anderson, of Fergus, Ont. flexed his offensive might notching a double-double with a game-high 20 points and 16 rebounds. He also paced the floor with seven assists.

“I’m feeling proud of our program and the way that everybody has really improved since last summer after the disappointing result at Worlds and everyone responded to the challenge to try and climb back up to one of the top teams in the World. This was a big step for us, but we are not satisfied yet,” said Anderson. 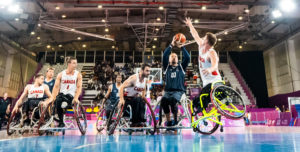 “It’s an awesome feeling. We have been working toward it for three years, so it will be great to go experience that and represent Canada, but we have a big game tomorrow and we are focused on playing whoever wins the next semi-final,” said Bo Hedges of Wonowon, B.C.

Twenty seconds into the game Anderson opened the scoring off the glass. Colombia responded with their big man Rodney Hawkins 20 seconds later with his own bucket off the glass. Back the other way the charge continued with Nik Goncin hitting his first of two 3-pointers in quarter one – hinting early that the game was going to be a high-flying, high-scoring affair. By the end of the quarter Bo Hedges of Wonowon B.C, and Toronto’s Lee Melymick also got in on the action to give Canada a slight 18-12 advantage.

David Eng, of Montreal, Que. provided Canada with an additional boost off the bench in the second quarter. He put up ten points through ten minutes and was a catalyst that helped ignite a 10-point Canada run. Just before heading into the break Eng thwarted Colombia’s attack by stealing the ball and thrusting it to a streaking Anderson who coolly deposited it in the basket.

Canada controlled the boards in the first half. They outrebounded their opponent 25-9 and held a 42-25 lead after twenty minutes.

The offensive onslaught was ongoing in the third quarter with Anderson opening the third frame with a three-pointer. Canada outscored Colombia 18-4 in the third and effectively put the game out of reach.

“Towards the end of the third quarter was when I started to feel some relief. At that point we were 25-30 points ahead and we knew we just had to keep it going, to use the clock and close it out,” said Goncin. 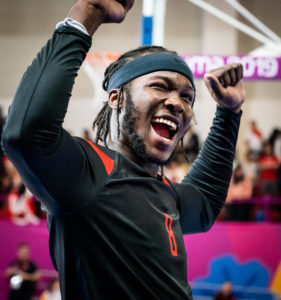 Colombia struggled to get past the Canadian defence and were limited to 35% shooting from the field. With three available spots for the Americas zone, they will still qualify for Tokyo 2020 if they can win the bronze medal match.

“We scored lots of points at Worlds last year, but couldn’t stop anybody. So, we knew our defense had to get better. We did it today. We showed that we improved, so that’s our safety blanket. You know whether we’re making or missing shots, if we play great defense then we have a chance to win any game,” said Anderson.

“We are just trying to improve every game, so if we get a chance to play in a gold medal game then it’s an experience for all our players, and something we can learn from, and try to prepare the same way every game,” said Hedges.

Goncin finished with 14 points, while Hedges and Eng rounded out the majority of the Canadian tallies with 12 and ten points respectively.

“It’s a relief obviously. Our job is not done, so I’m trying not to get too excited about it, but it’s a big deal for our program,” said Goncin.

Next up the Canadian Men will play USA for the gold medal. Tipoff for the men’s final is set for August 31st at 6:00pm ET, while the Canadian women are set to take on the USA today for gold in women’s championship game at 7:45pm ET.

Fans in Canada can tune in to watch the livestream of the gold medal games via the Canadian Paralympic Committee Facebook page, CBC Gem streaming service, cbcsports.ca, the CBC Sports app for iOS and Android devices, as well as the Radio-Canada Sports app and radio-canada.ca/sports.

“It’s a good feeling. We are not done. We still have one game, one more game, the final. We didn’t come here just to qualify,” said Canadian Men’s Head Coach Matteo Feriani.