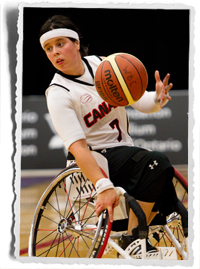 The Canadian Paralympic Committee, as part of the Défi sportif celebration of sport, will introduce 12 of Canada’s top summer athletes featured in its innovative “Super Athletes” marketing campaign. The anticipated unveiling of the edgy, new vignettes which feature world-class athletes will take place Friday, April 27, 2012.

Team Canada wheelchair basketball star Cindy Ouellet is one of Super Athletes featured in the campaign. Ouellet has been a member of the Sr. Women’s National Team since 2007 and she will compete in her second Paralympic Games in London this summer.

“This event is a great opportunity to introduce Canada to athletes on the road to the 2012 London Paralympic Games this summer,” says Henry Storgaard, CEO of the Canadian Paralympic Committee. “The vignettes we are releasing grab the viewers’ attention through imagery filled with attitude, pride and inspiration.”

The vignettes will launch at a media conference as 12 of Canada’s summer Super Athletes stop in Montreal along the road to London 2012. Storgaard and the Honourable Bal Gosal, Minister of State (Sport), will introduce the following Super Athletes:

The media conference will take place from 11:30 a.m. to 12:30 p.m. at the Complexe sportif Clauda-Robillard in Montreal.

About the Canadian Paralympic Committee:

About the Défi sportif AlterGo:

Unique in the world, the Défi sportif is an international event that gathers emerging as well as elite athletes with all disabilities. From April 23 to April 29, 2012, over 4,000 athletes from about 15 countries will meet for seven days of competition in Montréal and Longueuil. Presented by Hydro-Québec, the 29th Défi sportif AlterGo is organized by AlterGo, a grouping of about 100 organizations working for the social inclusion of people with disabilities through leisure.