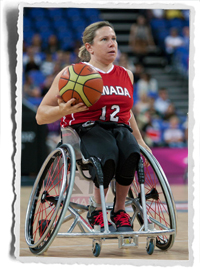 (Winnipeg, MB) For the first time in program history, the Canadian Senior Women’s National Wheelchair Basketball Team is fully centralizing in Winnipeg, MB from June 4 to early August as it prepares to compete at the London 2012 Paralympic Games.

In partnership with Canadian Sport Centre Manitoba (CSCM), Team Canada will converge at the University of Manitoba for a dynamic phase of mental preparation, physical training, and team-building exercises. For an in-depth look at centralization, check out Part IV of Wheelchair Basketball Canada’s London Calling video series!

“We are looking forward to kicking off the next phase of our training toward London. We are really confident we are on the right path and we are going to bring home the gold medal,” said Team Canada Head Coach Bill Johnson.

The fourteen women named to the preliminary roster in January are participating in centralization. The final roster of 12 athletes bound for the Paralympics will be announced later this summer.

“The CSCM is thrilled to be the primary training centre and host for the 2012 Paralympic Women’s Basketball Team as they make their final preparations for London 2012,” stated CSCM General Manager Randy Anderson. ‘The ability to work with and have these world-class athletes in our community for an extended period of time represents an outstanding opportunity for the CSCM.”

The Senior Women’s National Team is amongst the most successful and dominant teams in Canadian amateur sport history. The team captured three consecutive Paralympic gold medals in 1992, 1996, and 2000, and bronze in 2004.