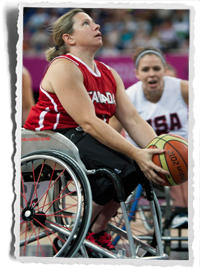 (LONDON) The Canadian Women’s Wheelchair Basketball Team lost their quarterfinal match to the USA 67-55 on Tuesday. Canada stormed out to an 11-point lead in the first quarter (21-10), but with the USA applying full-court pressure throughout the game, they were unable hang on to the lead. The Americans took control of the game in the third quarter when Canada got into foul trouble.

“Their press got to us,” said Team Canada Head Coach Bill Johnson. “…that happened tonight in the third quarter. That is when you rely on your teammates and by the time we did it was too late,” he added.

The Canucks were outscored 16-8 and 22-14 in the final two frames. Janet McLachlan, of Vancouver, BC was the game’s top producer and rebounder with 31 points and 13 boards, while Quebec City’s Cindy Ouellet added 18 points, 8 rebounds, and 6 assists in the loss.

“I did not get the feeling that we were out of the game. I thought we had a chance right until the end. On a different day, it could have gone a different way, and today it was theirs,” said McLachlan.

Desiree Miller and Rebecca Murray were instrumental for the USA. Miller scored team high 26 points and added 10 rebounds, while Murray finished with a triple-double (12 points, 11 rebounds, and 10 assists).

Canada will play Mexico Thursday for a chance at fifth place. The loss ends Canada hopes of reaching the podium for the first time since they won bronze in 2004 (which followed a string of three consecutive gold medals in 1992, 1996, and 2000).

“It is tough to take. It is disappointing because we had plans for bigger things and it is not going to happen,” said Johnson. “We will regroup and finish strong.”

The Canadian Men, who finished first in their pool with a 5-0 record, will play their quarterfinal match against Spain Wednesday September 5, at 7:00pm BST at the North Greenwich Arena.