Danielle DuPlessis Ready to Take Her Game to the Next Level 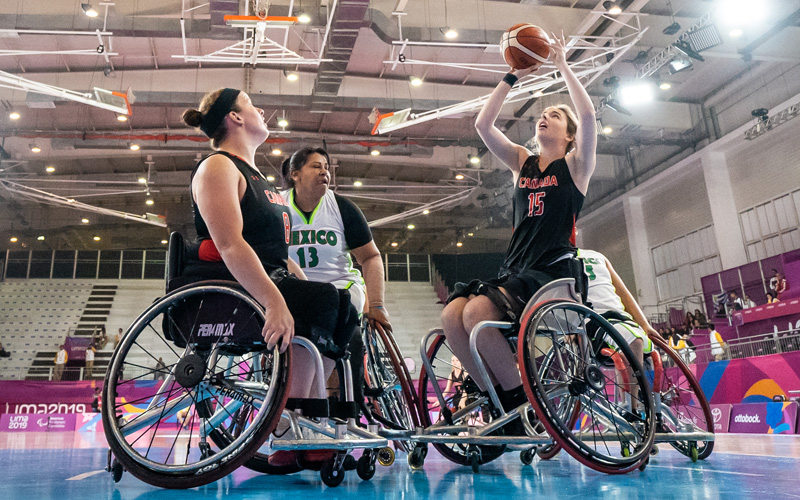 (Toronto, Ont.) As the days get shorter and the leaves change colour, the arrival of fall signals the start of a new basketball season on the horizon. Optimism abounds for wheelchair basketball athlete Danielle DuPlessis and the promise of what’s to come in the next year.

DuPlessis, 22, hits the court this week for her second season of training with the National Academy in Toronto and she will be a part of the reigning champion Toronto Rollin’ Raptors entry in division II of the National Wheelchair Basketball Association (NWBA) 2019-20 season.

“I’m really looking forward to the Academy season,” said DuPlessis. “We have kind of a different look this year. A couple of the women who were training with us have gone on to play collegiate ball so for me it’s going to be a really big season. I can take on a bit of a different role… I think it will be really good for me to come into my own.”

With DuPlessis moving up the depth chart she is also eager to take on more of a leadership role. She previously captained high school teams in basketball, soccer and volleyball before injuries during university led her down a path towards wheelchair basketball in 2017. She likes to lead by example on the field and play and is the consummate team player.

“I have a lot of catching up to do on the court and a lot of skills to learn on the court, but socially and as a team player, I have a lot to bring. That’s kind of what I bring right now with my enthusiasm and team chemistry that I try to facilitate.”

It won’t be long before her skill development on court catches up to her leadership abilities off of it given her tireless work ethic and dedication to her craft.

In addition to pursuing a master of science in cognitive rehabilitation at the University of Toronto, DuPlessis is committed to immersing herself in her rigorous training regimen with the Academy program and rounding out her game with the potential of more playing time during the NWBA season.

“My goal is to hopefully shape my game to become more of a threat on the court. I want to be solid on defence but I want to be an offensive threat and someone that has to be respected on court.

“I’m really excited. I think it’s going to be a big learning experience for me but hopefully it will help me to develop into more of an impact player.”

The native of Fredericton, N.B. is fresh off her first international Games experience at the 2019 Parapan American Games in Lima, Peru, after a late call-up to the team as an injury replacement. DuPlessis made the most of the opportunity by helping the Canadian women’s team qualify for the Tokyo 2020 Paralympic Games and defeat the rival Americans in a thrilling final to return home with a gold medal. 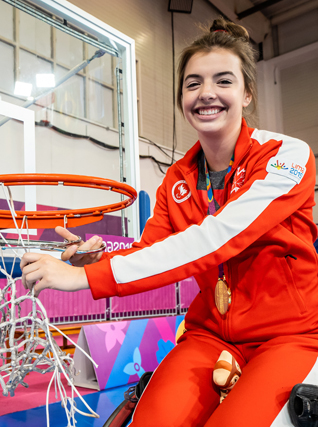 “The gold medal was like the cherry on top of a really great experience,” said DuPlessis, though she points to the team’s growth on and off the court as her personal highlight of the Games, particularly in the final game against the U.S. in which Canada came back to win 67-64.

“I love getting excited and hyped for my teammates so I was so excited to see everyone leave it all on the court and play their best. Most importantly, I thought we worked together and we achieved together. We were really a team on the court and I think we’re really close off the court, so I was super happy to see it all come together.”

With her national team career off to a hot start, the early success is fuelling her drive to elevate her own game over the coming season with her sights ultimately set on earning a spot on Team Canada for Tokyo 2020.

“It just makes me more excited and more enthusiastic to really get to work and solidify my spot on the roster,” said DuPlessis. “I was a late addition to (the team for) Lima, I would love to be an early addition to the Tokyo team. It’s going to be a big year for me in terms of putting in work on the court so that I’m ready for centralization, when the whole team is back together, to compete and to earn my spot.

“I’m hoping that the hours I put in with the Academy and in the weight room will really pay off this year because there is a pretty steep learning curve, so I’m excited to see it all come together and I hope it comes together in time to make the Tokyo team.”