(Toronto, Ont.) Canada, Germany, the Netherlands and the United States all remain undefeated after two days of play at the 2014 Women’s World Wheelchair Basketball Championship at the Mattamy Athletic Centre in Toronto, Ont.

Game 7: A Big Second Half Sends China to Victory

China comes back to defeat Japan 61-55

Two teams searching for their first victories collided to begin the second day of competition at the 2014 Women’s World Wheelchair Basketball Championship. At the end of a spirited match, China emerged with a hard-fought 61-55 victory over Japan.

A back-and-forth first quarter resulted in a 21-13 lead for Japan, who suffered an 83-53 setback to Team Canada on the tournament’s first day. Eight straight early points from China squared the match and set the pace for a competitive second. After 20 minutes of play, the Chinese side trimmed its deficit to three points to trail 34-31.

Team China carried its momentum from the second quarter and continued to pressure the Japanese defence. China closed on a 10-2 run to pull ahead 49-42 after three periods of play. In a tight fourth, Japan scored 13 points to China’s 12 to close-out the game.

Yong Qing Fu, the Player of the Game, led the Chinese offence with a game-high 29 points and 13 rebounds. Teammate Jia Meng Dai contributed 16 points and 14 rebounds to the winning side. Japan’s Mari Amimoto collected her second double-double in as many games with a 22-point, 15-rebound effort – both of which were team-highs.

Following his team’s win, head coach Yan Han was pleased with his team’s performance, but stressed the need to improve as his squad looks ahead to the coming match. “Defence is an important aspect that we must work on. Against a tough opponent, we will need to employ different strategies and try different techniques.”

With the victory, China draws its record even at 1-1 in pool B play. The team will push to find consecutive victories in tomorrow’s day three match-up against (1-0) Team Canada with tip-off slated for 3 p.m. Japan will try to enter the win column in an encounter with (1-0) Great Britain at 8 p.m. 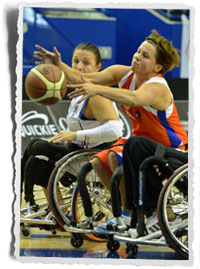 The Netherlands remained undefeated at 2-0 after a confident 77-21 victory over France. Both sides completed the first day of the 2014 Women’s World Wheelchair Basketball Championships with victories. The Dutch defeated Peru 89-5 while the French opened 61-42 over Mexico.

The Netherlands broke open a tight first quarter with a 10-2 run to take a 16-8 lead after 10 minutes. In the second, the Dutch locked down their end of the court, allowing just three points in the period to go ahead 30-11 at halftime.

The sturdy Dutch defence stayed true to form in the second half, holding France to single digits in each frame. The French were limited to four and six points in the third and fourth quarters respectively, while the Netherlands registered 47 in the half to finish the contest.

Mariska Beijer led the way for the winning side with 30 points and 10 rebounds, including six on the offensive end. France’s Fabienne Saint Omer-Delepine and Angélique Pichon each scored six points and gathered eight rebounds. The Netherlands’s pressure defence limited the French and forced 24 turnovers.

Team Netherlands will next try to reach 3-0 in a day three morning match against (0-1) Mexico. France will continue its tournament against (0-1) Australia with a start time of 10 a.m.

Team USA continued its strong start to the 2014 Women’s World Wheelchair Basketball Championship with a 64-29 victory over Mexico. The first day of competition saw the Americans register a solid 68-52 win over 2012 Paralympic silver-medalist Australia.

The American side opened the match with a steady 17-6 quarter. Mexico fared better in the second with nine points, but could not hold back their opponent’s offence to cut into the deficit. The United States shot over 50 per cent in the first half to extend its advantage to 37-15.

The second half continued in the same manner with Team USA holding firm in its own end while its offence extended the lead to 55-23. A quiet 9-6 fourth quarter in favour of the Americans concluded the contest.

For the second straight game, Germantown, Wis. Product Rebecca Murray paced the American attack. She notched a game-high 26 points to follow-up her 30-point night on day one. Mexico’s Floralia Estrada posted 19 points to lead her team.

Team USA Head coach Stephanie Wheeler was pleased with today’s result, but she stressed her team’s need to learn and grow from this competition. “Our goal coming into this tournament was to get better every time we’re on the court. That will be our focus again tomorrow. We still need to improve. We have the bar set at a certain level for ourselves and we always have to go up.”

The United States next faces Peru at 1 p.m. on the tournament’s third day. Mexico will face the undefeated Dutch in tomorrow’s first match at 8 a.m.

Big first quarter the difference in the win.

Canada improved to 2-0 at the World Championships with a 63-25 victory over Brazil on Saturday afternoon.

Canada exploded for a 16-3 run in the remaining five minutes of the first quarter and never looked back from there, holding a 42-17 lead at halftime.

In the second half, it was Canada’s defence that was holding strong, limiting Brazil to just eight points.

Canada’s head coach Bill Johnson was happy after the game not only with his team’s specialty, their defence, but also with how his team is putting up points.

“We pride ourselves on our defence, so we put a lot of work into our defence in the past year or so,” Johnson said. “We know that there’s going to be days where that’s not going to be as easy and that’s why we really want to be able to fall back on our strong defence.”

Janet McLachlan had a game-high 21 points for Canada while Cindy Ouellet chipped in with 11 points and 17-year-old Arinn Young added ten points.

Canada will play China on Day 3 of competition at 3 p.m. while the now 0-2 Brazil squad will play Germany at 6 p.m.

Game 11: Australia Gets in the Win Column

The team had the game under wraps right from the start, posting a 48-6 lead at half time.

Peru reached double-digits in the fourth quarter but it was too little, too late. Pilar Jaurequi led Peru offensively with six points while Marleni Tunqui had four points to round of the scoring.

Australia’s Kathleen O’Kelly-Kennedy shot 71 per cent and ended the game with 25 points to lead her team.

Peru falls to 0-2 in the tournament while Australia’s record is now even at 1-1.

Game 12: Germany Closes Out Day 2 With Win Over Great Britain 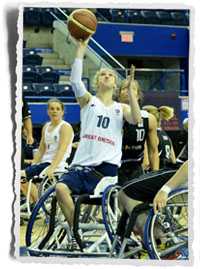 Germany closed out Day 2 of competition at the Mattamy Athletic Centre with a 55-33 win over Great Britain to improve to 2-0 at the World Championships.

After a close first first quarter, Germany started to pull away in the second on the strength of some great defence. They finished the game with 35 rebounds, and limited their opponents to just 19.

The second half was much the same, with the London 2012 champions continuing their strong play. Gesche Schunemann led the charge for the Germans with 26 points and 11 rebounds while Marina Mohnen also had a double-double with 13 points and 13 rebounds.

The loss drops Great Britain to an even .5 record at 1-1. They next play Japan on Sunday night at 8 p.m. Germany’s Day 3 action is against Brazil at 6 p.m.