(Ottawa, Ont.) Bill Johnson is the head coach of the Canadian Senior Women’s National Wheelchair Basketball Team. He inherited the role of chief bench boss in 2009, after serving as an assistant coach with the team for three seasons. Johnson coached Team Canada to consecutive podium performances at the world championships, including a gold medal victory on home soil in Toronto in 2014 and a bronze medal in 2010. At the London 2012 Paralympic Games, Johnson’s first Paralympic appearance as head coach, the women’s team placed sixth overall. This year Johnson’s sights are set high as he believes the Canadian women have the experience necessary to reach the podium in Rio.

Can you describe the progress the team is making as you make your final preparations for the Games?

We identified a few things after the 2014 World Championship that we wanted to improve upon. Specifically, there were individual skill deficits we wanted to address. We have done this and we’re now deeper than we have ever been.

We also have made significant changes to our team defense. We have seen gains in this regard, and will continue to work on it until and throughout the Games.

Canada will play Great Britain, Argentina, Germany and Brazil in the preliminary round in Rio. Can you share your thoughts on those match-ups? 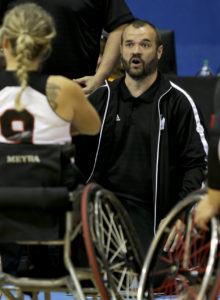 I am very happy with the way that the pools worked out. Great Britain will be a great test for us right off the start. They are young and can push for days; it will be a great way to start.

Argentina is a team we don’t see very often. They are definitely improving, I look forward to playing them again. Germany is always a battle for us. We had that great game in the final at the 2014 World Championship, and have basically split every game since then. I am sure this will be an epic battle once again.

Brazil is a bit of a wildcard. They have some great athletes, and of course the passion of the Brazilian people behind them. This is absolutely a game we cannot overlook.

What do you enjoy most about coaching at this level?

I enjoy mostly the opportunity to be a part of something bigger than all of us. To achieve something so difficult with a large group of people is incredibly satisfying. I also enjoy being able to pit my plans and adjustments against the best in the world. There are very few opportunities in life to measure yourself against the very best!

Canada has had so much success at Worlds but has struggled to replicate that success at the Paralympics in recent years – what can the team do to be successful in Rio?

I can only really speak of London. I felt like we had a young group that was just overwhelmed in the Paralympics. Going through the grind of worlds in 2014 has really helped us all learn what it takes to be successful in a long tournament. I am confident we can use that experience to help us achieve our Paralympic goals.

What is the overall team performance goal for the Games?

Our goal is to have our best possible performance. We don’t feel like we did that in London, so we really want to feel that we played as well as we could coming out of Rio. If that results in a medal, which it absolutely can, all the better!

Outside of the competition, what are you most looking forward to about the Games? Are there any other sports you’ll have a chance to check out?

I love the atmosphere of a Paralympics. It is such an awesome event, with so much energy surrounding it. I probably won’t get to any other events, but just being in the Village is incredible.