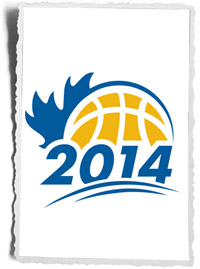 (Toronto, Ont.) The largest women’s world wheelchair basketball championship in history will leave a lasting legacy in Ontario and around the world. Today the 2014 Women’s World Wheelchair Basketball Championship (2014WWWBC) organizing committee announced a partnership with the Ontario Trillium Foundation (OTF) and unveiled plans for several legacy initiatives designed to make an impact on the sport at the local, national, and international levels when the tournament moves into the Mattamy Athletic Centre in Toronto June 20-28, 2014.

“As a wheelchair basketball athlete myself, I am extremely proud to be an Honorary Chair of the 2014 Women’s World Wheelchair Basketball Championship. A lasting legacy of wheelchair sport achievements will continue through the true excellence that event participants have achieved through their passion for athletics. Together, we are building legacies for the future – to show the world the possibilities of sport, inclusivity, and accessibility,” said 2014WWWBC Honorary Chair Rick Hansen.

“Ontario is proud to welcome the world’s top para-athletes for the 2014 Women’s World Wheelchair Basketball Championship. Competitions such as this give us all an opportunity to celebrate the remarkable athleticism, achievements and determination shown by Ontario’s para-athletes and build on the great success that we have achieved on national and international stages. As we prepare for the 2015 Pan/Parapan American Games, we are proud to support Ontario athletes of all abilities with an opportunity to compete and win on home soil,” said Michael Chan, Minister of Tourism, Culture and Sport and Minister Responsible for the 2015 Pan/Parapan American Games.

The 2014WWWBC is a milestone event that celebrates the ongoing growth of women’s sport, inclusivity and accessibility. Due to the ongoing growth and prosperity of wheelchair basketball worldwide, the women’s tournament will be held separately from the men’s competition for the first time since 1994. By building on the legacy of hosting the inaugural Women’s Under 25 World Championship in 2011, and working toward the success of the Toronto 2015 Parapan American Games (TO2015), the organizing committee will forge a legacy for female wheelchair basketball athletes in Ontario and around the world.

“The 2014 Women’s World Wheelchair Basketball Championship will have a positive, meaningful, and lasting impact on the community,” said Tournament Director Wendy Gittens.

“We are pleased to be working with the Ontario Trillium Foundation and all of our partners to build capacity in the Province, to increase awareness, dedicate resources to growing the women’s game, enhance inclusivity and accessibility, and to create a financial and equipment legacy that will ensure the ongoing success of hosting a prestigious international event like this in Toronto.”

In partnership with the OTF, the organizing committee has hired a legacy coordinator to oversee the 2014WWWBC Legacy Program, which includes the continuation of the Futures (mentorship) Program and the introduction of a comprehensive school’s program. The legacy coordinator will also oversee a 3-on-3 research and development camp, an international women’s congress, and workshops for coaches, and technical officials.

Initially launched in 2011, the Futures Mentorship Program was created to support the growth and development of female participation in wheelchair basketball and encourage young females to continue to learn and grow within the sport as athletes, coaches and administrators. Guided by former National Team members, the Futures Program brings together 12 young women to participate in a series of sport-specific workshops, educational sessions and leadership activities designed to help them understand the culture, environment, and commitment necessary to compete in the sport at an elite level and inspire them to become leaders in their respective communities. With the world-class 2014WWWBC serving as the backdrop, the Futures Program will provide a fun, informative and positive environment for sharing and learning practical life skills.

Working with Ontario Wheelchair Sport Association, and other community partners, the Schools Program will raise awareness, highlight inclusivity, and promote positive attitudinal change toward disability. An online resource will help educate teachers and students about the sport and teach physical literacy. Participants will be encouraged to get involved in their communities and embrace healthy, active lifestyles. Armed with sport wheelchairs, a demo team will visit 80-100 schools in the GTA giving students a chance to try wheelchair basketball and connect with local athletes/role models in an interactive, inclusive, and informative way. Participating schools can “gear up” for the 2014WWWBC by taking the initiative to learn about the customs and culture of one of the 12 participating countries with added opportunity to attend the event and show their support. Afterwards the sport wheelchairs will be donated to support the development of local grassroots programs.

3-on-3 Research and Development Camp

The International Wheelchair Basketball Federation is currently piloting new 3-on-3 rules (released in 2012) with the ultimate goal of implementing an inaugural world championship. Leveraging the assembly of international and national technical expertise gathered in Toronto for the 2014WWWBC, a 3-on-3 research and development camp will look in depth at technical aspects of the game to make recommendations for moving the game forward. It will simultaneously provide Canada with the opportunity to evaluate domestic implementation and ensure alignment with Long Term Athlete Development.

In partnership with the IWBF, the first-ever International Women’s Wheelchair Basketball Congress will facilitate discussion on the state of the women’s game internationally. Taking place on the tournament off day, the congress will include sessions, forums, guest speakers and workshops focused on women’s development, coaching the female athlete, health and fitness concerns, recruitment strategies, accessibility issues, growing the women’s game and sharing of resources.

Workshops for Coaches and Technical Officials

The organizing committee will utilize the 2014WWWBC to train local and international coaches, officials, and classifiers by hosting clinics and workshops that offer participants with the opportunity to receive educational and professional development to improve their knowledge and skills.

For more information about the 2014WWWBC Legacy Program please contact:

Over 400 athletes, coaches, officials, delegates, and volunteers will attend the 2014WWWBC that features 12 participating countries. Canadians can catch a sneak peek at the top 12 female wheelchair basketball players in Canada, including emerging local talent and highly decorated stars, preparing to compete in one of the most fiercely competitive and exciting spectator sports to be played at the Toronto 2015 Parapan American Games and Rio 2016 Paralympic Games.

The 2014WWWBC organizing committee is also partnering with Toronto 2015 Parapan American Games to ensure the success of both events.

The 2014WWWBC will generate over $4 million in economic activity in Ontario.