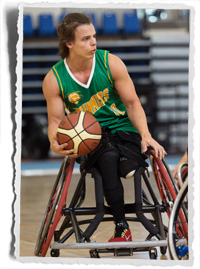 (MARTENSVILLE, SASK.) All of the fast-paced, hard-hitting action of the Canadian Wheelchair Basketball League (CWBL) arrives in Martensville, Sask. May 4-6 when the top club teams in the country compete in two tiers at the 2018 CWBL National Championship at the Martensville Athletic Pavilion.

Media and spectators will have the opportunity to witness all of the skill and athleticism that make wheelchair basketball one of the most popular sports for athletes with a disability in the world. Competition begins the morning of Friday May 4, 2018 and concludes with a medal ceremony following the gold medal games on the afternoon of Sunday May 6, 2018.

Teams will compete for the title of national champion in two tiers. The tournament also features current and former national team athletes, including several hopefuls to represent Team Canada at the upcoming 2018 IWBF World Championships.

The tournament is being hosted by the Saskatchewan Wheelchair Sports Association (SWSA).