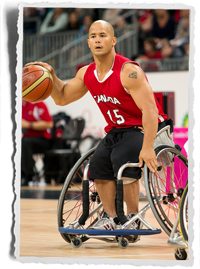 Anderson, a native of Fergus, Ont., will represent the Toronto Raptors while Eng, of Montreal, Que., will suit up on behalf of the New York Rolling Knicks. Both will play for the eastern all-star team.

The 2014 NWBA All-Star Game will take place at the New Orleans Ernest N. Morial Convention Center with opening tip off set for 7 p.m. CT. The event is a precursor to the NBA All-Star weekend festivities.

The National Wheelchair Basketball Association (NWBA) is comprised of over 200 basketball teams across twenty-two conferences and seven divisions. The NWBA was founded in 1948, and today consists of men’s, women’s, intercollegiate, and youth teams throughout the United States of America and Canada.