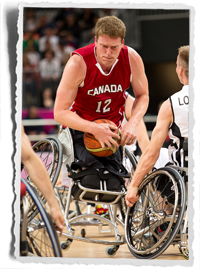 (Toronto, ON) Patrick Anderson is a finalist for the Male Athlete with a Disability of the Year at the 2012 Ontario Sport Awards. The winners will be announced at a gala event on April 18, 2013 in Toronto, ON.

Anderson, a native of Fergus, ON, was on top of his game at the London 2012 Paralympic Games where he posted career numbers in helping the Canadian Men’s Wheelchair Basketball Team to its third gold medal in four Paralympic Games. In London, he finished tops in tournament scoring averaging 25 point per game and first in total rebounds with 88. His historical performance included the first two triple doubles in Canadian history.

The 2012 Ontario Sport Awards recognize the top amateur athletes and coaches, whose outstanding performances in both national and international arenas have inspired people across the province. The awards celebrate the contributions of athletes, coaches, officials, volunteers and corporate sponsors who support amateur sport in Ontario.

About the Ontario Sport Awards

Established in 1965, the Ontario Sport Awards honour outstanding achievements in Ontario amateur sport. It is the highest recognition for sport excellence in the province.