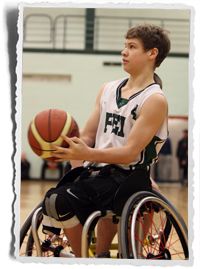 The 2015 Canada Winter Games take place February 13th to March 1st 2015 in Prince George, B.C. The wheelchair basketball competition is scheduled to take place during the first week of the Canada Games, from February 16-20, 2015 at Duchess Park Secondary School in Prince George.

The athletes selected to Team PEI are as follows:

The team will be coached by Adam Loo. Barb Gillis is the team manager.

About ParaSport and Recreation PEI

ParaSport and Recreation PEI is a charitable, non-profit organization that was established in 1974 and incorporated in 1976 to support participation by person who are physically challenged in recreation and sport activities. For more information, please visit www.parasportpei.ca.