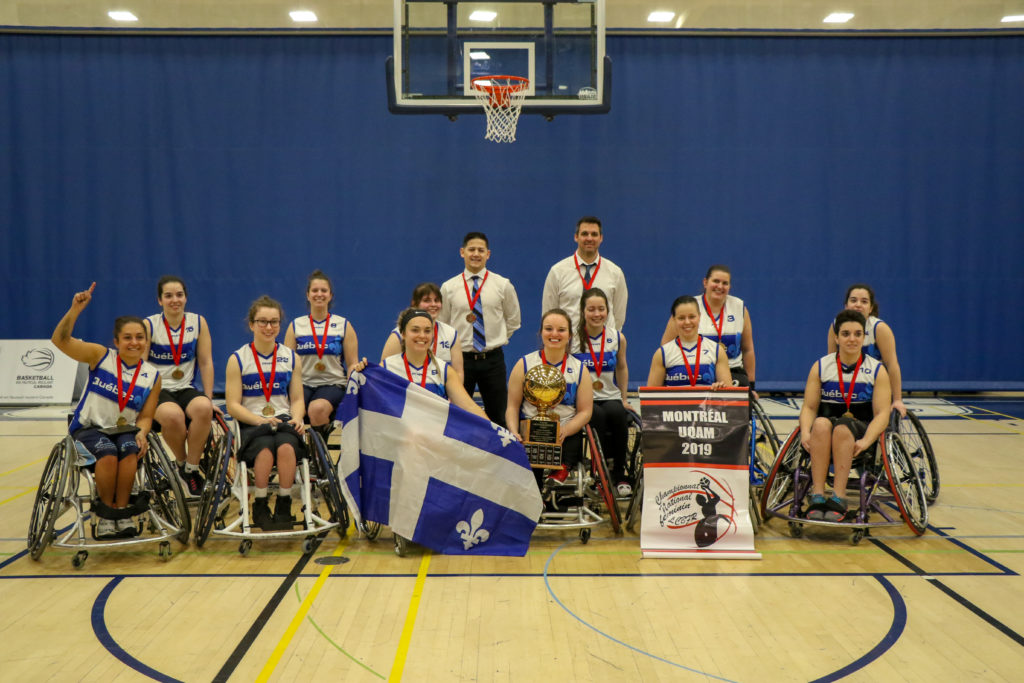 (MONTREAL, QUE.) Team Quebec seized the gold medal at home in a decisive 71-38 win over the Edmonton Inferno at the 2019 Canadian Wheelchair Basketball League (CWBL) Women’s National Championship in Montreal. The B.C. Breakers claimed the bronze medal after defeating Saskatchewan.

“We’re really happy,” said Quebec captain Cindy Ouellet (Quebec City) of the thrill of winning at home. “It just felt really good to be at home with our families there. It’s been a few years that we’ve been close to winning and now we’ve won it.” 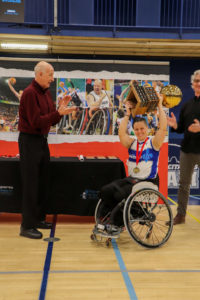 This marks the third time Quebec has won the national title, with each victory coming in their home province.

Quebec was relentless on the defensive side of the ball, using its speed to pressure the Inferno and completely stifle the Edmonton offence.

“We knew defence was one of our only chances in the game, we’re so small that we had to be on chairs and stay on defence the whole time and it paid off,” said Ouellet, who notched a game-high 20 points in the championship game and was named to the tournament all-star team.

With the home crowd behind them, Quebec stormed out to an early lead and forced multiple turnovers. Edmonton rallied in the second quarter to keep the game within reach, but Quebec was equal to the task and wore the Inferno down in the second half.

The B.C. Breakers captured the bronze medal in dramatic fashion with a 70-69 win over Saskatchewan. The Breakers carved out a nine-point lead at the half, but Saskatchewan flipped the script in the third quarter and erased the deficit to set up an epic finish that came down to the final minute of the game.

Down by one point, Breakers player Kady Dandeneau gained possession in the defensive zone with teammate Tara Llanes taking off up court. Dandeneau lobbed a breakout pass that Llanes reeled in for an uncontested layup with 20 seconds left to go. Saskatchewan had the opportunity to counter on the final play of the game but couldn’t convert on three attempts through traffic in a cluttered key.

“So happy to finally come away with a bronze medal,” said Llanes. “I think (the Breakers) got fourth the last four years and it was just heartbreak every time so we’re super pumped. Sask played a really good game, shots were dropping and they were attacking in the right way. I’m just really proud of our team for sticking to it.” 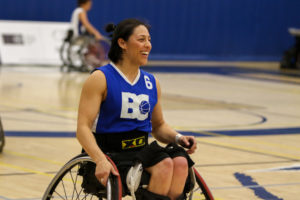 “I just knew we had like 30 seconds left in the game (on the winning play.) I was at the top of the key and knew I wasn’t getting the rebound. So I just tried to leak out, just go. Kady made an awesome pass, perfect and it dropped right where it needed to and I was just like ‘don’t screw it up’,” joked Llanes. 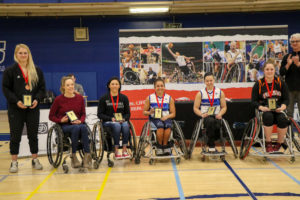 Visit wheelchairbasketball.ca for all of the recaps and results from the tournament.

The 2019 CWBL Women’s National Championship is the top women’s wheelchair basketball club event in Canada and is open to athletes with and without a disability. The event was hosted by Parasports Québec.