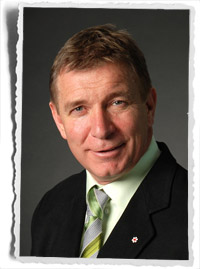 (TORONTO, ONT.) – The largest international women’s wheelchair basketball tournament in history moves into the Mattamy Athletic Centre in Toronto, June 20-28, 2014 and exactly one-year before the start of the 2014 Women’s World Wheelchair Basketball Championship competition, host Wheelchair Basketball Canada is thrilled to name the Man in Motion, Rick Hansen, as the honorary chair of the event.

“Wheelchair basketball has been a big part of my life,” said Hansen. “The world championships were defining moments in my career as an athlete, and helped to shape my training, endurance, and ultimately, the success of the Man In Motion World Tour.  The legacy of what was achieved through sports continues today through the Rick Hansen Foundation.  I am extremely proud to be part of the 2014 WWWBC; all participants have achieved true excellence in their passion for athletics. Together, we are building legacies for the future, to show the world the possibilities of sport, inclusivity, and accessibility.”

“The 2014 Women’s World Championship is a milestone event that celebrates the ongoing growth of women’s sport, inclusivity and accessibility and will forge a legacy for female wheelchair basketball athletes in Canada and around the world,” said Tournament Director Wendy Gittens.

Canadians can catch a sneak peek at the top 12 female wheelchair basketball players in Canada, including emerging local talent and highly decorated stars, preparing to compete in one of the most fiercely competitive and exciting spectator sports to be played at the Toronto 2015 Parapan American Games and Rio 2016 Paralympic Games.

“Hosting international competitions is a wonderful opportunity for Canadians to witness the thrill of high-level Paralympic sport while inspiring the next generation to get involved,” noted Gaétan Tardif, President of the Canadian Paralympic Committee. “The 2014 Women’s World Wheelchair Basketball Championship will be the perfect springboard to continue to build excitement for the Toronto 2015 Parapan American Games.”

“It is an incredible opportunity to host the World Championship in Toronto,” said Team Canada veteran and Richmond Hill, Ont. native Tracey Ferguson. “Being able to demonstrate the skill and competitiveness of wheelchair basketball with the hometown crowd supporting us will be a huge advantage for the team.  I am especially excited as this is the first chance in my 20-plus year career to compete at a major event in Canada, and it is in my hometown, which makes it even more special.”

The 2014 Women’s World Wheelchair Basketball Championship organizing committee will partner with Toronto 2015 Parapan American Games to ensure the success of both events.

The 2014 Women’s World Wheelchair Basketball Championship will generate over $4 million in economic activity in Ontario.

The Canadian Women are amongst the most successful and dominant teams in Canadian amateur sport history; they are the only women’s wheelchair basketball team to capture three consecutive Paralympic gold medals (1992, 1996, and 2000), and bronze in 2004.

The event organizing committee is dedicated to leaving a lasting impact through several legacy projects that support the ongoing development of the women’s game domestically and internationally including a Futures Program (mentorship), School’s Program, 3on3 research and development camp, international women’s congress, and workshops for coaches, and technical officials.