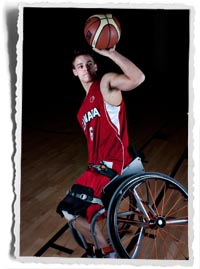 Team Canada earned a berth into the World Championship by winning the Americas Zone qualifier back in March 2013 in Mexico City, defeating host Mexico 74-67 in the final game. Canada will be one of 11 confirmed teams competing for the world title, along with Australia, Germany, Great Britain, Iran, Italy, Japan, Mexico, South Africa, Sweden, and host Turkey.

“I am particularly excited by the depth of our juniors across the country with athletes representing seven provinces and territories from coast to coast. Through continued hard work these young men will make an ongoing impact within our national team program for years to come,” said Wheelchair Basketball Canada High Performance Director Paul Zachau.

First up, the newly assembled team will centralize July 22-Aug. 9 at the University of Toronto Scarborough to train for the upcoming world championship.

The 12 junior men are: (athletes’ city of residence indicated / returning players from the 2009 team denoted with a *):