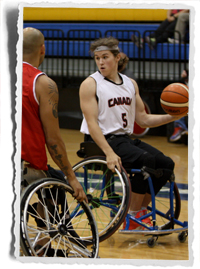 (Toronto, Ont.) Team Canada fell to Great Britain by a score of 68-40 while Team USA improved to 3-0 on the third day of exhibition play at the Toronto Challenge on Sunday night at the Mattamy Athletic Centre.

After a close opening half, Great Britain put the game out of reach with a monstrous third quarter by outscoring the Canadian side by a 22-4 margin. Ben Moronchuk paced the Canadian offence with 10 points while Terry Bywater led all British scorers with 9 points.

Team USA remains undefeated after a 65-54 win against Turkey. The Americans are now 3-0 thanks to a balanced attack led by Matt Scott and Nathan Hinze who each tallied 12 points. Ozgur Gurbulak led the Turkish side with a game best 13 points.

Canada will face Great Britain in the first semi-final at 6:15 p.m. ET on Monday. Team USA will meet Turkey in the other semi-final at 8:30 p.m. ET. Action continues through to Tuesday at the Mattamy Athletic Centre. All games are open to the public.