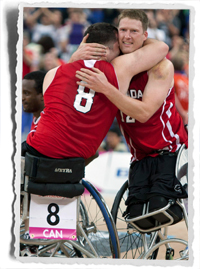 (LONDON) The Canadian Men’s Wheelchair Basketball Team won its third gold medal in the past four Paralympic Games on Saturday, beating the defending champions from Australia 64-58. Canada avenges the previous final in 2008 when Australia ended Canada’s bid for a three-peat.

Canada concludes the tournament with a sterling 8-0 record and solidifies its dominance on the world’s biggest stage. The victory marks Canada’s 31st win since 2000, improving their overall record to 31 wins and one loss in the last 12 years. They have collected three gold and one silver medal in that time.

Patrick Anderson, of Fergus, Ontario, scored a game-high 34 points, 10 rebounds, and eight assists for Canada. Number 12, in 2012, posted career numbers, finishing the tournament on top, or near the top, of every offensive category. He averaged better than a double-double per game and in eight games, totalling a tournament-leading 200 points (25 points per game), 88 rebounds (11 rebounds per game) and 64 assists (eight assists per game).

“It feels like I have never won anything in my life. I feel like a little kid. They are a fantastic team and they make you scrap for 40 minutes. It was a great final,” said Anderson.

Canada got off to a slow start and had trouble hitting buckets early on. They took their first lead at 4:12 of the second quarter, though shooting just 41% from the field. Similar to their semi-final victory over Great Britain, the third quarter proved to be Canada’s best. They outscored Australia 20-15 in the third frame, before sealing the victory with stout defending late in the fourth quarter.

Following success at the 2008 Beijing Paralympics, Team Canada had its shares of ups and downs on the road to London. They had a disappointing seventh-place finish at the 2010 World Championships, and failed to meet expectations for a top-two finish in Guadalajara for the 2011 Parapan American Games – they settled for bronze and narrowly qualified for the 2012 Paralympics. Jerry Tonello, Team Canada’s head coach, said the key to Canada’s success was getting the players to trust their abilities.

“We have had variable results over the last four years. To be able to put that in the back of their minds and reach a peak performance at this time is incredible.” 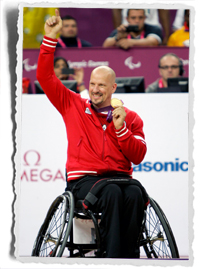 Now three-time Paralympic gold medalists Richard Peter, of Vancouver, BC, and Joey Johnson, of Winnipeg, Manitoba, were clutch for Canada. Both were monstrous in the paint with the majority of their points coming from down-low. Peter tallied 10 points and four rebounds, while Johnson scored eight points and also notched four rebounds. Along with Dave Durepos, of Fredericton, New Brunswick, the seasoned veterans competed in their fifth Paralympic Games, and are expected to retire clad in gold and on top of their games.

Co-captain of Canada David Eng, of Montreal, Quebec, came off the bench to augment Canada’s scoring. He went 3-for-4 from the field (75%) and finished with six points in the game, and third-highest in the tournament for the Canucks, with 59 points.

“This is awesome. This is really something. We worked so hard to get back to this point,” said Eng.

Rookie Tyler Miller, of Kitchener, Ontario, scored two points against Australia. After the match he reflected on his first Paralympic experience calling it “the top of the top.”

“The Paralympics is just amazing on its own. From the Village, to the facilities, it’s all been amazing, but then you put a gold medal on top of that and I don’t know if I can match that the rest of my life. It’s the pinnacle,” added Miller.

Wonowon, BC, native Bo Hedges rounded out the scoring for Canada with two-points. Overall, he was second in team scoring with 85 points, and was particularly good from the free-throw line, where he went 9-of-11 for 82% accuracy.

The Canadian women’s wheelchair basketball team’s Paralympic journey is also complete. They exited the tournament in 6th place after a 73-70 loss to China Friday morning.