Great Britain opened the fourth day of competition at the 2017 Men’s U23 World Wheelchair Basketball Championship with a 119-23 win against South Africa. The British team came into the game looking for an opportunity to boost their point differential in the event of a tie in their pool.

Head coach of Great Britain, Scott Wallace, discussed the situation, “Challenging game today for a number of different reasons for Great Britain. With one eye on the potential tie breaker at the top of our division, points difference might come into it. It’s never comfortable to go out and dominate a team but we tried to concentrate on the basics, on the fundamentals and what we find from South Africa was a spirited team with a great passion and all credit to them. They made us work at times throughout that game and they came away smiling which is the true spirit of wheelchair basketball and it was a real pleasure to play against them and it’s just a shame it had to be under such demanding circumstances.” 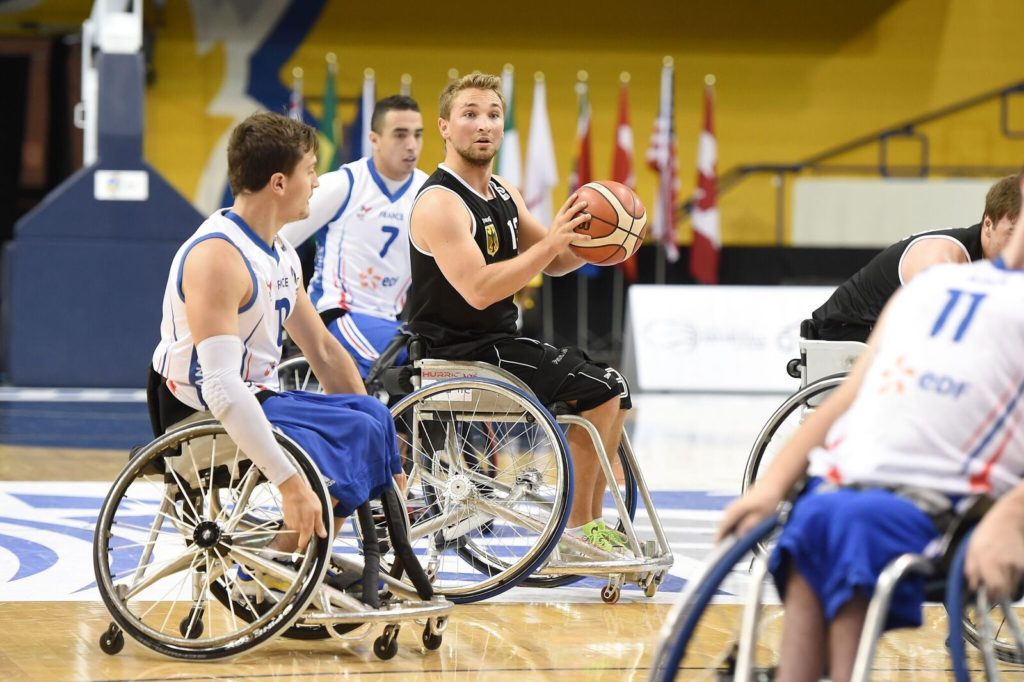 Germany and France arrived on court ready to improve their 2-1 records. It was an even paced game coming out of the first quarter, with France ahead 18-17. The French men found some momentum in the second to outscore the German team 17-10 and maintain the lead.

In a concerted effort to close the gap, Germany pushed hard in the second half of the game to eventually tie things up in the opening of the fourth quarter. It came down to one minute remaining on the clock when Germany found themselves up by one. France missed a key shooting opportunity which allowed Germany to push ahead and France was unable to sink the three that would have taken the game to overtime, leaving Germany with the win. 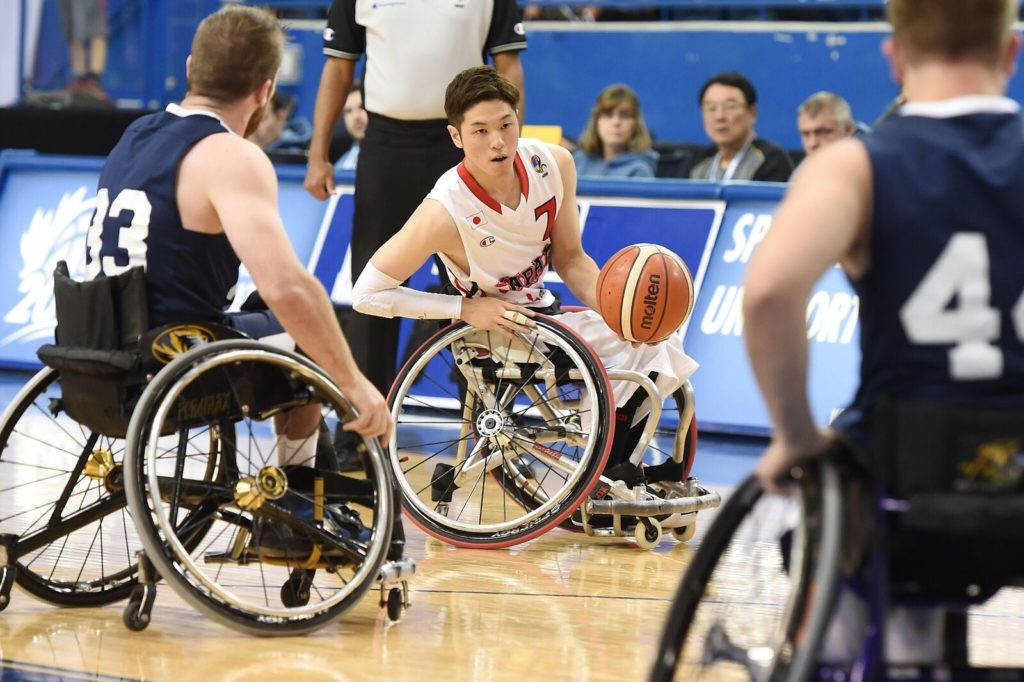 Japan improves to a perfect 4-0 in Pool B after a 64-57 win against the United States. What began as a strong showing for the Japanese team saw the United States push past their slow start to offer Japan some heated competition.

The United States managed to get within five points of Japan’s lead in the fourth quarter but Japan’s constant defensive pressure kept the Americans from catching up.

Two players from the United States secured double doubles, Marshall Lindsay with 10 points and 10 rebounds and Kyle Gribble with 19 points and 11 rebounds. Japan’s point leader Takuya Furusawa came in with 21 points while Renshi Chokai was just one rebound away from a double double with 13 points for Japan. 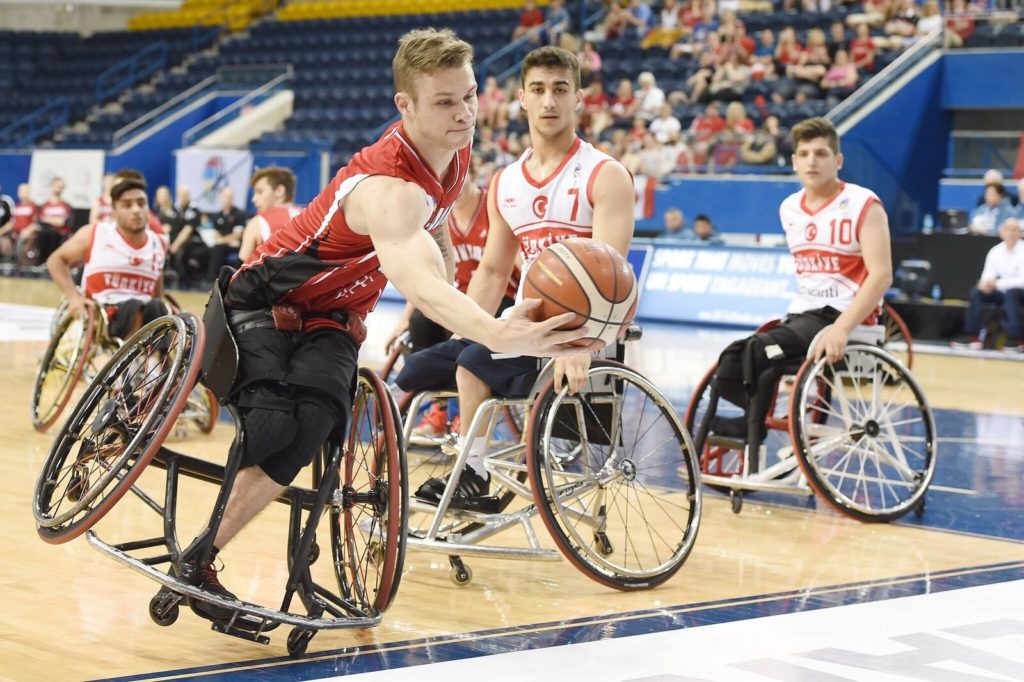 Canada will move into their final game of preliminary action with a 2-2 record after admitting defeat to the top team in Pool A. Turkey claimed a 70-38 victory against host Canada.

The Canadians were unable to hit their usual offensive stride throughout the game and allowed Turkey to create an early lead. The Turkish team more than doubled the Canadian output in the first half.

“I thought we were nervous when we came out and it definitely showed. We missed some shots early again, all week our game plan was having a good start and we didn’t have that good start. It takes a while for us to get our momentum rolling,” said Canadian head coach Darrell Nordell.

Although picking up the pace after the halftime break, the host team shot just 24 per cent against Turkey’s 49 per cent and ultimately couldn’t turn the game around. Ben Moronchuk topped Canada in scoring with 14 points. Enes Bulut of Turkey claimed the game-high 31 points and complemented it with 12 rebounds for a double double.

Canadian team captain Alex Hayward discussed Canada’s performance, “We knew it was going to be a tough game coming out so, the big thing we were looking for was not to give up and I think even the bench came out and gave it their all so that’s really what we were looking for and that was perfect.” 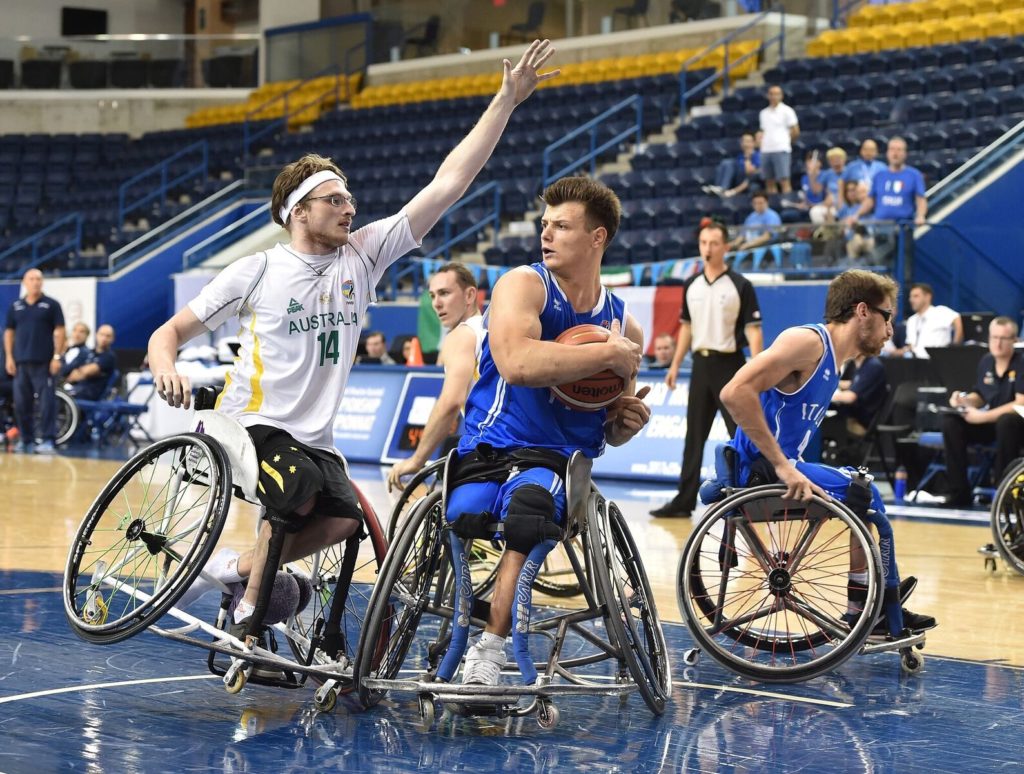 Australia took a real barn burner as they notched Italy 60-53 in the first overtime game of the tournament.

Australia dominated throughout the game and carried an 11 point lead going into the fourth quarter when Italy began a spirited comeback. The Italians outscored the Australian side 20-9 and tentatively took the lead until the Aussies stormed back to tie it at 50-50 with 42 seconds remaining. The teams couldn’t get the go-ahead basket and the final buzzer sounded signalling overtime. Australia controlled the five minute overtime period while outscoring their opponent 10-3.

Tom O’Neill-Thorne fell just short of a double double as he contributed 22 points and 9 assists, while also chipping in with 7 rebounds. Jake Fulwood came off the bench and had a strong game with 22 points and 8 rebounds for Australia. Sabri Bedzeti countered with 21 points of his own and an impressive 19 rebounds.

With a 59-46 win against Brazil, the Iranians improve their record to 2-2 while the Brazilians finish winless in Pool A.

Team Iran tallied 17 points in the opening quarter while limiting the Brazilian offense to 5. Brazil managed to match Iran’s output in the second but Iran still had a 29-17 lead at the game’s midway point.

Iran continued to power their way past Brazil’s defense to push up to a 24 point lead in the third. The fourth quarter Brazil made a valiant push against Iran, outscoring them 19-8 but it wasn’t enough to erase their deficit.