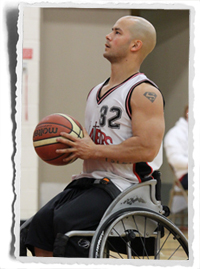 (Ottawa, On) – Montreal, QC native David Eng of Les Gladiateurs de Laval (blanc) scorched his way into the Canadian record books on Sunday playing in the Canadian Wheelchair Basketball League Open when he scored 51, 58, and 64 points in three consecutive games. It is believed that he is the first individual to record three straight 50 plus point performances in league history.

Eng’s offensive output increased as the single day tournament unfolded at St. Mark’s High School in Ottawa, Ontario.  He poured in seven 3-pointers in the first game to start his day and accounted for 51 of his team’s 57 points, in a 67-57 loss to the Quebec Bulldogs.

Les Gladiateurs (blanc) then narrowly lost to Les Gladiateurs (rouge) 74-75 with Eng tallying 58 points in just his team’s third loss of the season.  The loss was enough to bump them down into second place in the conference.

They would make good on their third and final game of the day with a 92-86 win over the Ottawa Royals in which Eng buried a game-high 64 points.

The Bulldogs currently sit in first place with an overall record of 10-2, Les Gladiateurs (blanc) are second with a 9-3 record, Les Gladiateurs (rouge) are third with a 4-8 record, and the Ottawa Royals are fourth with a 1-11 record.

Eng has been a member of the Senior Men’s National Team since 2004 (winning Paralympic gold in 2004, and silver in 2008). He is slated to compete in the London 2012 Paralympic Summer Games where the Canadian Men’s Team is pressing for a fourth consecutive podium finish.