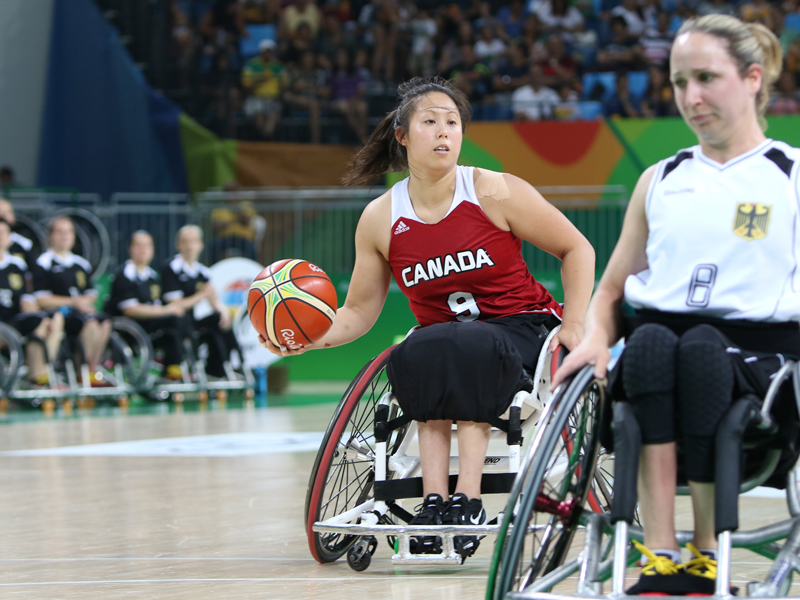 (Rio de Janeiro) The Canadian women’s Paralympic wheelchair basketball team had its first setback of the Rio 2016 Paralympic Games in a hard-fought 68-54 loss to Germany on Sunday morning at the Carioca 1 Arena. On the men’s side, Team Canada remains winless at Rio 2016 following a 76-45 loss to Japan on Sunday night at the Rio Olympic Arena.

The women’s match was an absolute battle in front a full and boisterous crowd, featuring the reigning world champion Canadians against the defending Paralympic champion Germans.

“It’s not the outcome we wanted, but we will take the lessons we learned today against Germany to help us get better and move forward,” said Team Canada player Amanda Yan of Burnaby, B.C.

“We did a pretty good job of staying composed out there when things weren’t going our way. On the floor, on the bench we are always looking at our teammates and saying ‘hey, it’s okay, move on, let’s focus on the next play.’ We know we can only control what we can do, and that’s to play hard, to push hard and support one another. And that’s something I think we did a good job of out there today.”

Canada started off somewhat sluggishly and allowed Germany to capitalize on some early defensive miscues. After the opening minutes Canada began to settle into the game. Yan was on fire coming in off of the bench, sparking the Canadian offence with some precision shooting. Germany had a 20-14 lead after one quarter of play. 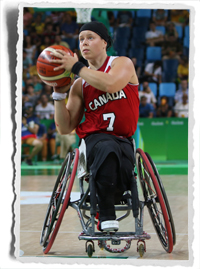 Canada started to push the pace in the second frame. The Canadian women battled back to erase the deficit and tie the game at 29 with 4:12 remaining in the first half. While Germany successfully prevented Canadian Janet McLachlan (Vancouver, B.C.) from setting up down low in the key in the first quarter, she would not be denied as she forced her way to the basket through traffic to score the go-ahead basket and give Canada the 31-29 lead at halftime.

Germany regrouped early in the third quarter to re-take the lead but Canada stemmed the tide to stay within striking distance. Germany had the 45-42 advantage after three quarters. The game was close through three-and-a-half quarters until Germany found another gear mid-way through the fourth frame. Some clutch shooting by Germany extended the lead as Canada struggled to keep pace.

Cindy Ouellet (Quebec City, Que.) tied for the game-high with 23 points as she led the offensive charge for Canada. Yan had 13 points in a strong outing on both sides of the ball for the Canadian side. The one-two punch of Marina Mohnen and Mareike Miller had 23 and 22 points respectively for Germany.

The Canadian women (2-1) play their final preliminary round game against host nation Brazil on Monday at 11:45 a.m. BRT at Rio Olympic Arena. 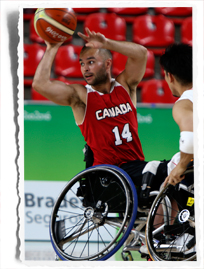 Both Canada and Japan entered the game in search of their first win. Japan proved to be the better team on the night, gaining momentum throughout the contest as they improved their execution on both sides of the ball. Canada once again had difficulty converting on its scoring chances and began to fade as the game got out of reach in the final quarter.

With the loss Canada remains winless but is looking to finish the tournament on a high note and continue to make gains for the future.

“We have to be able to look ahead to the future and there are a lot of lessons yet to be learned, especially for the rookies that we have,” said Team Canada co-captain David Eng, on Montreal, Que. “They need to cherish this experience so that in four years when Tokyo 2020 comes around, all of those lessons will have been learned. We’ve got to keep our heads high. If we don’t we won’t see the lessons to be learned in the next two games.”

“We’ve been on top of the world for so long. All of the teams that we’re facing, they have that extra motivation to come out hot against us. They know we’re in a rebuilding phase, and they’re just taking advantage of it after all of the hardships that we’ve given them throughout the last decade.”

Canada and Japan were evenly matched in the opening frame, with Japan holding on to a slim 13-9 lead after 10 minutes of play. Hiroaki Kozai kick-started the Japanese offence in the second frame, which outpaced the Canadian side en route to a 35-24 edge at halftime. Canada stuck with Japan for three quarters, before Japan turned the tide in the final quarter.

Eng and Bo Hedges (Wonowon, B.C.) were the top point producers for Team Canada with 18 and 11 points, respectively. Kozai led the Japanese team with 19 points, followed closely by Reo Fujimoto with 15 points.

Canada (0-4) plays its final preliminary round game against Turkey on Monday at 7:30 p.m. BRT at the Rio Olympic Arena.