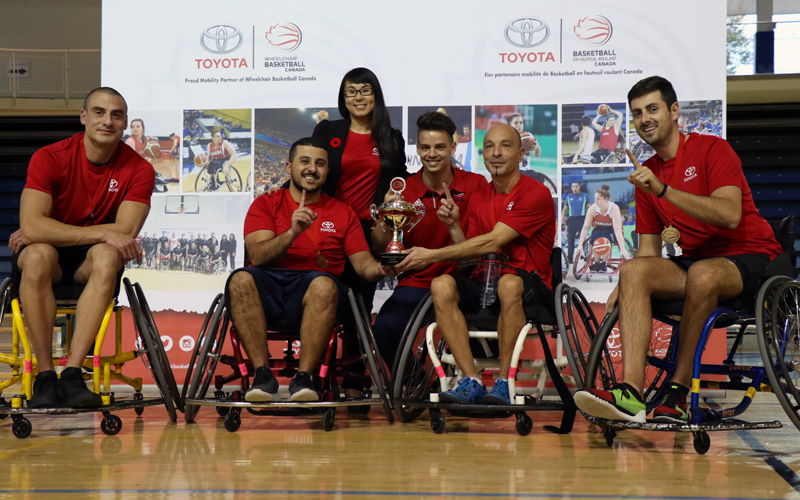 (Toronto, Ont.) The corporate community was out in full force for Hoopfest on Wednesday, putting their wheelchair basketball skills to the test in a challenging and thrilling 3-on-3 tournament alongside members of Team Canada at the Toronto Pan Am Sports Centre in Scarborough.

“It was just a blast,” said Mary Grosso, a partner at Grosso Hooper Law, of her team’s first Hoopfest experience. “It was so much fun and it was great to get to work with the athletes on Team Canada to have them show us the ropes. It’s a great event – so well organized and a great opportunity for people outside of wheelchair basketball to get exposure to the great sport that it is.”

Toyota Canada enjoyed another successful outing at Hoopfest with an all-Toyota championship final. Bichay’s Ballers were victorious on the day, emerging as the Hoopfest 2019 champions. Rounding out the podium finishes were silver medalists We Heart JKK, also from Toyota, and bronze medalists Live Quickie on behalf of Sunrise Medical.

The Rotaracts of Scarborough UofT made a splash at Hoopfest as the top fundraising team of the tournament, while Teddy Katz, founder of communications consultancy Think, Redefined, earned all-star status as the top individual fundraiser.

“I really enjoy it,” said Katz. “I think it’s something I’d recommend for a lot of people to come out and try out the game and you really get a new appreciation for it.

“I think it’s a great sport. I think more Canadians should know about it so that’s why I try to come out every year, if possible. I’m a media person so I’d love to see a lot more media people come out and give it a shot because I think when they go and report on it afterwards they’re going to have a whole new perspective on it.”

The tournament put participants through the paces as many tried wheelchair basketball for the very first time. Thankfully they were able to count on some expert coaching from members of the Canadian national team program, including hopefuls on the road to Tokyo 2020.

One of those hopefuls is Paralympian Nik Goncin, who acted as the Honorary Chair of Hoopfest this year while also coaching his team to the championship title. He shared his story, conveying the powerful impact the sport has had on his life while underscoring that none of it would have been possible without the grassroots program in Regina where he got his start.

As an ambassador for Hoopfest, Goncin was happy to see people try and fall in love with the sport just as he did, but he also hopes that the support from the event creates more opportunities for people with disabilities to get in the game.

“It’s amazing,” said Goncin. “Everyone is having a great time and at the same time we’re doing something great for the grassroots programs so hopefully it leads to more people getting involved.”

Eight teams participated in Hoopfest this year, including entries from WBC partners Toyota Canada, Grosso Hooper Law and Sunrise Medical Canada. The Rotaracts of Scarborough UofT, members of the Toronto Police Services, and representatives from the Toronto Pan Am Sports Centre also took part in the tournament.

Hoopfest is a half-day challenge that builds team spirit as corporate and community teams enjoy the thrill of competing in a fun and completely inclusive 3-on-3 wheelchair basketball tournament. Participants also have the opportunity to interact with Team Canada athletes and coaches. The goal of the event is to raise funds that enable more Canadians to experience the life-changing impact of wheelchair basketball while bringing awareness to the sport and the athletes.

The next installment of the annual Hoopfest event is slated for November 6, 2020 in Toronto.