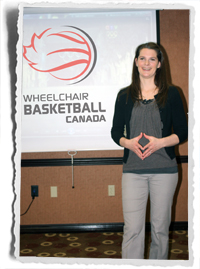 Three-time Olympic gold medallist Jennifer Botterill was the keynote speaker at Wheelchair Basketball Canada’s 2012 National Team Selection Camp Tuesday evening in Las Vegas, Nevada. Botterill, who has been a member of the Canadian Women’s Hockey Team since 1997 and has attended 4 Olympic Games, winning gold in 2002, 2006, 2010 and silver in 1998 is also a five time World Champion and was twice named the most valuable player at the World Championship tournaments.

The 37 wheelchair basketball athletes in attendance, along with coaches and staff, were presented with advice on dealing with pressure, the value of living in the moment, and other keys to success that will help the Canadian teams in their pursuit of gold at the 2012 London Paralympics.

The selection camp will run until January 13th and will help determine the 24 athletes (12 men and 12 women), which will compete for Canada at a number of marquee international events in 2012, most notably the Paralympic Summer Games in London, England.

The camp roster includes 15 athletes (9 men and 6 women) with Paralympic Games experience including 6 men and 2 women who have earned multiple Paralympic medals.

The Senior Women’s National Team is amongst the most successful and dominant teams in Canadian amateur sport history. The team has captured three Paralympic gold medals and has reached the podium at six consecutive World Championships.