Jonathan Vermette Gets the Call for Sr. National Team at 2013 Americas Cup 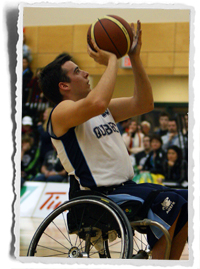 (Ottawa, Ont.) With a berth to the World Championship on the line, Jonathan Vermette (Sherbrooke, Que.) will join the Sr. National Men’s Team at the Americas Cup Qualifier in Bogota, Colombia August 4-11, 2013.

Canada must secure a top four finish to qualify for the World Championship, which is set for the summer of 2014.

“I look forward to having Jonathan Vermette as part of the senior national team at our qualifiers in Bogota, Columbia. Jo has been in this role in the past and has performed admirably. His participation is a testament to the progression of our development card (D-card) athletes, which enables him to join the team with little disruption in terms of team dynamics, and systems play,” said Jerry Tonello, Team Canada men’s head coach.

Vermette will round out the roster of 11 players going to the qualification tournament.  Paralympic gold medalists Yvon Rouillard (Montreal, Que.) and Brandon Wagner (Burlington, Ont.) will not be making the trip due to injuries.

Vermette is also a member of the U23 men’s national team which will compete at the 2013 World Championship in Adana, Turkey September 5-15, 2013. He and his brother, Philippe, are two of three returning players from the 2009 squad that finished eighth.

The Senior Men’s National Team went undefeated at the London 2012 Paralympics to capture their third gold medal in four Paralympic Games. It is the latest accomplishment in a sport dynasty that has placed them on the podium at four consecutive Paralympics and at five of the last six World Championships.