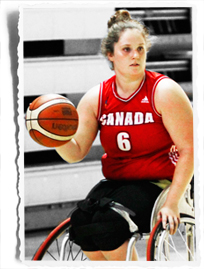 With a multitude of recent retirements, including the departure of four starters, the Canadian Senior Women’s National Wheelchair Basketball Team looks to a new round of leaders as the team heads to Cali, Colombia for the Americas Cup 2017 – the tournament that sends the top four qualifying teams to the Hamburg 2018 World Championship.

Led by rookie National Team Head Coach Marc Antoine Ducharme and with four new recruits, the team has a lot of firsts to face, but with the experience on the roster between coach and players alike, the defending world champions have the potential to go far, beginning this week in Cali.

Arinn Young, now in her fourth season with Team Canada, knows that this is all part of the game. In any sport, it is tough to face challenges as you take on a new chapter.

“It’s scary and exciting all at the same time,” says Young of the changing of the guard on the roster. “It’s something every athlete has to face, we lose family members and gain new ones, but no matter what we keep looking and moving forward.”

Young, who has played basketball her entire life through both the standup and wheelchair game, realizes that each player has their part to play. One of her greatest assets is being able to hype up her team from the sidelines, letting her teammates know that through the ups and downs she is a cheerleader that will always have their backs.

“We lost so many players, so most of us have to step up and have more minutes on court. I’m just excited to be a part of this new adventure with our team and hopefully come out with wins.”

Fellow fourth-year player Melanie Hawtin brings a lot of speed to the team, along with extensive experience. She believes that each player is a leader in their own way, and because of that they will strive through the challenges that they will face.

“This will be the first time in my career going through retirements and changes within our program,” says Hawtin. “This of course changes team dynamics.

“We have been doing a really good job at building and shaping our team,” she adds.

Known for her intensity, third-year player Rosalie Lalonde’s strong character shines on and off the court. While Canada has a strong team that is ready to work for each other, Lalonde acknowledges that they are still learning how to play with each other and knows that she has a much bigger role to play.

“I have a completely new role on this team,” says Lalonde. “I feel more pressure on my shoulders. I need to be there for my teammates.” 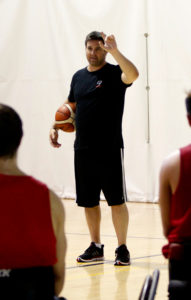 Ducharme, a champion in his own right, has had success both as a player and coach at every level in Canada, including coaching his Quebec squad to back-to-back championships at the Canada Games in 2011 and 2015.

He returns to the National Team program after having previously been an assistant coach with the senior men in 2006-2007, a stint that included claiming the gold medal at the world championship in 2006.

He is also very familiar with a number of his National Team players through his coaching experience in Quebec, including Quebec natives Lalonde, Élodie Tessier and veteran Cindy Ouellet. He says his experience as a player really helps him navigate his way as a coach and really connect with the team.

“This is a new era for this team and we are building a solid group for the coming year,” says Ducharme. “Several good players have retired following Rio but the curve of our progression will continue to go up.”

“Coach Ducharme is very calm and collected,” says Young. “He really coaches to better ourselves on and off court and to overall be more confident in ourselves.”

“He works really hard to shape this team with the strengths of every player,” adds Lalonde.

Thus far in 2017, Team Canada has delivered good showings in its games during friendly competitions in France and the United States. Despite all the new beginnings for the program, the Canadian women are united and ready to build on that momentum and put their best game forward on their quest to qualify for the world championship when the real games get underway this week.

Team Canada kicks off their Americas Cup 2017 tournament on Wednesday, August 23 at 5 p.m. ET against the host team Colombia.