Nik Goncin Finding His Way On and Off the Court 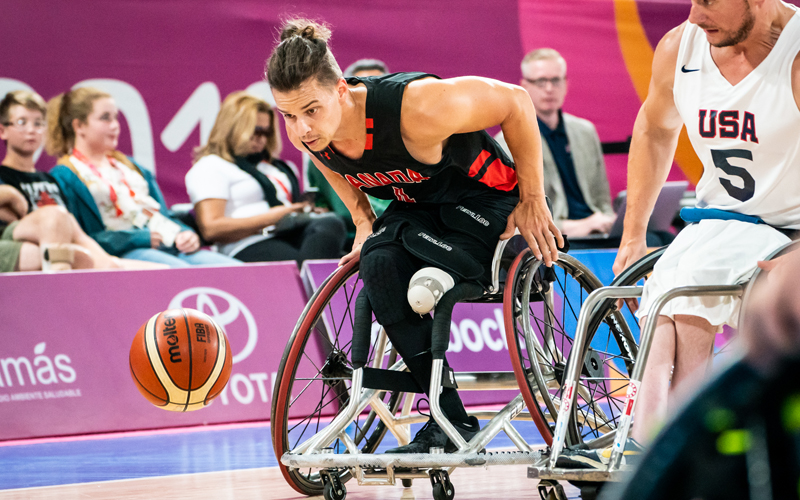 (Toronto, Ont.) Nik Goncin credits wheelchair basketball with giving him a renewed sense of direction in his life after he lost his left leg to cancer at the age of 15. A rising star since he began playing the sport in 2008, Goncin is poised for the biggest year yet of his career with his compass firmly set towards Tokyo 2020 and a growing desire to give back to the sport.

“Tokyo 2020 will be my second Games experience so my approach is going to be completely different,” said Goncin. “I’m four years older and I’m at a different place in my life.”

Goncin feels much more comfortable with his game and knows what to expect going into Tokyo thanks to previous team trips to Japan. With less than a year to go before the Paralympics, he also recognizes there is much work still to be done.

He is immersing himself with training at the National Training Centre in Toronto and will make his debut with the Rollin Raptors in division I of the National Wheelchair Basketball Association (NWBA). He hopes to be a leader for Canada’s developing core of young National Team athletes.

Goncin is eager to see what Team Canada can do on the sport’s biggest stage.

“It’s going to be the hardest Paralympics that we’ve ever had for wheelchair basketball. There’s more competitive teams. It doesn’t matter how good you are, one game or one loss and that could be the end of your dreams. So there’s a lot more on the line than there has been in the past because of the increase in the depth of competition.

“We want to have a podium finish. That’s our goal and that’s what we’ve been working toward for four years and that’s been the centrepiece of what we’ve been doing. It will be an opportunity for us to really find out if we did put in enough work. I’m pretty confident that we’re going to do as well as we hope to do.” 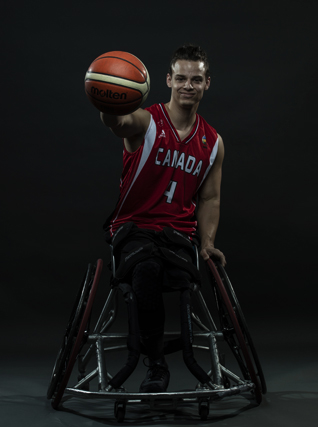 Outside of his podium ambitions, the 27-year-old Regina native is also looking at the bigger picture in his life and the platform he has to have a positive impact on other people.

“As I get older it becomes more important to me as a person to give back to the sport and try to get people involved,” said Goncin.

He will do just that this week as the honorary chair of Hoopfest, Wheelchair Basketball Canada’s signature fundraising event, which raises funds to support grassroots wheelchair basketball programming and enable more Canadians to experience the life-changing impact of the sport.

“There’s a lot of people with disabilities and not everybody knows about wheelchair basketball,” said Goncin. “A very small percentage of the population really knows that they can try it and play, and that there’s a basketball team close to them, and that is sort of disconcerting to know that there’s people that are out there and they want this opportunity but they don’t know it’s there.

“Hoopfest is a wicked time… it’s a great way of sharing the message and funding some of the teams that are close to these people who don’t know that there are opportunities [to play].”

Goncin hopes to cast an even brighter spotlight on parasport in his new role as a member of Team Toyota. Earlier this year he was among a select group of Canadian Olympians and Paralympians on the road to Tokyo to be sponsored by Toyota Canada. Goncin was flattered by the recognition – which he referred to as “a milestone in his life” – and is grateful to be a part of something bigger than any one athlete.

“It is an amazing opportunity to push the sport forward and not just the sport, but parasport in general. It’s been a real focus really since London (2012) and I think Tokyo is going to take that next step and Toyota is 100 per cent behind that. It means a lot. I’m extremely proud to even be given consideration to be a part of that team.

“It’s definitely big picture. It’s not just me, it’s not just our sport or whoever is on the team. It’s really about recognizing that people are people and it doesn’t really matter whether they use a wheelchair, have braces or use crutches or whatever it is.”

While big things lie ahead for him as an athlete, Goncin is in an equally good place away from basketball. He recently completed his masters in exercise physiology and is currently studying prosthetics and orthotics at George Brown College.

“I’ve found something I would like to do for the rest of my life.”

Goncin was adamant about pursuing a career “where I can give back to people and help them get back on their feet.” A look backward at his own journey helped illuminate his way forward.

“I had a pretty special guy who was my prosthetist when I first lost my leg and he had had the same cancer that I did 25 years prior to meeting me. So I had an amputee helping me and fitting me with a prosthetic, and he really changed my outlook on life.

“I didn’t really realize what kind of impact he had on me until later in life. This guy really had been a special part in where I went after I lost my leg, with being able to walk again, being involved as part of that general population again, not being viewed as different and seeing that I can have a life, a wife and kids, and all these things that I wanted that I thought I might not be able to have anymore,” he said.

“It just kind of clicked that that is what I should do so that’s why I decided to go down that route. I want to be what he was to me.”

Goncin is certainly well on his way.