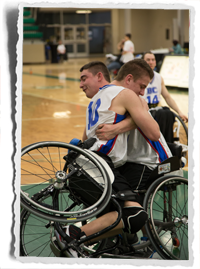 (LONGUEUIL, QUE.) The best junior wheelchair basketball athletes in Canada will be competing at the Centre sportif de cégep Édouard-Montpetit in Longueuil, Que. from March 16-18, 2018. This event acts as the seeding tournament for the 2019 Canada Games in Red Deer, Alta.

Spectators and local media are invited to attend the tournament. Media can capture visuals during the games and athletes and coaches will be available for post-game interviews. The gold medal game will take place on March 18 at 12p.m. EST. The full schedule can be found here.

Who: Top junior athletes in Canada including athletes from the Canadian national team program