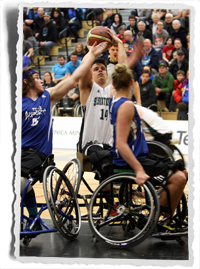 (Prince George, B.C.) Two powerhouse teams in three-time defending champion Quebec and top-seeded Saskatchewan will face off for the gold medal in wheelchair basketball at 7 p.m. PT on Friday at the 2015 Canada Winter Games in Prince George, B.C.

Team Alberta (2-2) will take on Team P.E.I. (3-2) in the bronze medal game at 5 p.m. PT on Friday.  The medal games will take place at Duchess Park Secondary School.

Quebec (4-0) and Saskatchewan (5-0) are undefeated entering the gold medal final. The contest will be a rematch of the final at the 2014 Junior National Championship, in which Saskatchewan defeated Quebec by a single point.

“Last year at junior nationals we won so Quebec is going to want some revenge,” said Team Saskatchewan’s Nik Goncin. “We can’t take them lightly but if we put all four quarters together we have a good chance to come out on top.”

Host team British Columbia (2-3), Manitoba (0-5), New Brunswick (2-3), Nova Scotia (0-4) and Ontario (3-2) will continue competition in the consolation playoff round on Friday to determine their final placement at the tournament.

Team Ontario came out on top 60-56 over Team New Brunswick in a tightly contested match to open the consolation playoff round. The momentum swing belonged to New Brunswick in the opening quarter, as Team N.B. outscored Ontario 21-10. The tide slowly turned in Ontario’s favour from that point onward, as the team rallied to erase the early deficit and take the lead going into the final quarter. The fourth quarter was intense with neither team willing to go quietly. The game came down to the final minute of play, when Ontario delivered to some clutch shooting down the stretch to secure the win. Aaron McDonald, of Hamilton, Ont., registered 21 points for Team Ontario. Sean Wilson, of Saint John, N.B., led the New Brunswick attack with 34 points and 15 rebounds for the double-double.

Team B.C. improved its record to 2-3 with a 53-38 win over Nova Scotia in consolation round play. The hometown team started strong to seize an 18-8 advantage in the opening ten minutes. The Team B.C. offense continued to click en route to a 35-20 lead at halftime. British Columbia used its depth to score 29 points off the bench, compared to six points for Nova Scotia. Local Prince George product Avril Harris scored a team-high 15 points and picked up 11 rebounds to record the double-double for Team B.C. Grant Miller, of Halifax, had a stellar outing for Team Nova Scotia, producing 18 points and 14 rebounds for the double-double.

Team Quebec is off to the gold medal final with a shot at a fourth consecutive Canada Games title. Quebec was in reigning champion form in a lopsided semifinal win against Prince Edward Island. Quebec came out shooting and forced P.E.I. to turn over the ball early, outscoring the Island team 14-4 in the opening quarter. Team P.E.I. settled down in the after the first frame, but had no answer to shut down the versatile Quebec attack. Benjamin Palmer, of Laval, Que., and William Gamache, of La Prairie, Que., had the hot hands for Team Quebec with 20 points apiece. Team P.E.I.’s Liam Hickey, who averaged a tournament leading 26.5 points per game in the preliminary round, scored a team-high 11 points to go with 11 rebounds. Jeremy Watts and Westley Johnson, both of Charlottetown, had 10 points each for Team P.E.I.

Saskatchewan was victorious in a heated semifinal match with rival Alberta in front of a rocking crowd. With the win, Saskatchewan advanced to the championship game, while Alberta will compete for the bronze medal. The intensity front and centre as of opening tip off as both teams tried to set the tone in a seesaw first quarter that saw Alberta trail by a single point. Saskatchewan began to dictate the pace is the second frame to take a 40-33 lead into halftime. Led by a massive 41 points scored by Regina native Nik Goncin, Team Saskatchewan ultimately pulled away on the scoreboard. Ben Moronchuk, of Edmonton, was the top scorer for Alberta with 23 points.

Team New Brunswick recorded its second win of the tournament after defeating winless Manitoba in the consolation round to conclude the day. Team N.B. delivered a solid effort on both sides of the ball, shooting 51.6 per cent while limiting the Manitoba offense to 16 points in the first half. Colin Higgins, of Team New Brunswick, produced a team-high 12 points in the win. Kail McCluskey led all Team Manitoba players with eight points.