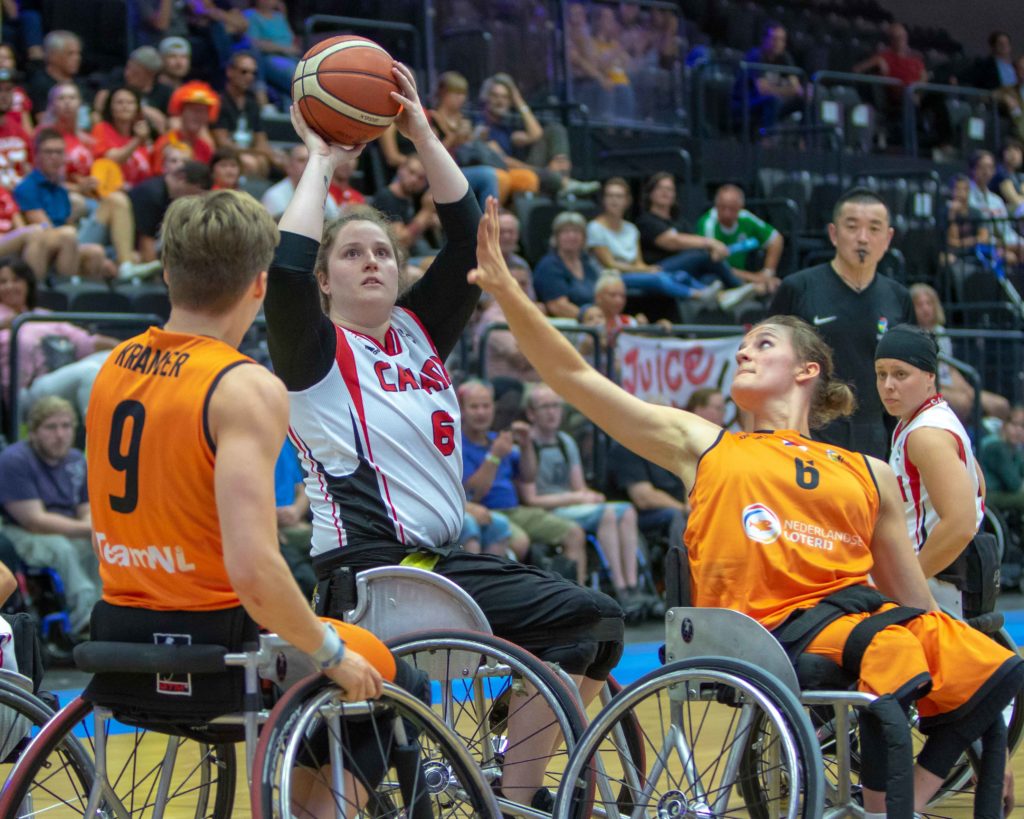 (TORONTO, ONT.) – Wheelchair Basketball Canada (WBC) and CBC/Radio-Canada, Canada’s Paralympic Network, announced today live streaming coverage of two Team Canada feature games taking place at the Toronto Pan Am Sports Centre in June. Canadians will be able to watch all of the action via the free CBC Gem streaming service, as well as on WBC’s YouTube channel, when the Canadian Women’s Wheelchair Basketball Team takes on the 2018 World Champions, the Netherlands, on Thursday, June 13 at 7:20 p.m. ET, and the Canadian Men face Argentina on Wednesday, June 19 at 10 a.m. ET. CBC Sports will also offer the streaming coverage at cbcsports.ca and via the CBC Sports app for iOS and Android devices.

The feature games are part of Team Canada’s preparation for the Lima 2019 Parapan American Games, where Canada will compete to qualify for the Tokyo 2020 Paralympic Games. The Canadian Women must finish top two, and the Canadian men top three, to earn berths into Tokyo 2020.

Viewers will be able to follow the journey of some of Canada’s top Paralympians and Lima 2019 hopefuls from the Canadian Women’s and Men’s National Wheelchair Basketball Teams including 2019 WBC Female Athlete of the Year, Arinn Young (Legal, Alta.), and men’s co-captain David Eng (Montreal, Que.) who is a four-time Paralympian, and has won two gold medals and a silver medal at the Games. Eng was also named Canada’s flag bearer for the Opening Ceremony at the Rio 2016 Paralympic Games.

“Our athletes are deeply proud to represent Canada and motivated to give their best, day in and day out, while training and competing year-round in important international friendlies like the June Feature Games,” said Wendy Gittens, Executive Director, Wheelchair Basketball Canada. “Providing Canadians with opportunities to experience the thrill of live wheelchair basketball is a key driver for us as we continue to build momentum and share the journeys of our athletes toward the Lima 2019 Parapan American Games and Tokyo 2020 Paralympic Games.”

Both June Feature games will take place at the WBC National Training Centre at the Toronto Pan Am Sports Centre located at 827 Morningside Avenue in Scarborough, Ont. Admission is free and the games are open to the public.

About Wheelchair Basketball Canada
Wheelchair Basketball Canada is the national sports governing body responsible for the organization of the sport in Canada. It is a non-profit, charitable organization that is committed to excellence in the development, support and promotion of wheelchair basketball programs and services for all Canadians from grassroots to high performance. Wheelchair basketball is a fast-paced, hard-hitting, competitive sport in which Canada is held in high esteem around the world for winning a combined six gold, one silver, and one bronze medal in the last seven Paralympic Games. For more information visit www.wheelchairbasketball.ca

About CBC/Radio-Canada
CBC/Radio-Canada is Canada’s national public broadcaster. Through our mandate to inform, enlighten and entertain, we play a central role in strengthening Canadian culture. As Canada’s trusted news source, we offer a uniquely Canadian perspective on news, current affairs and world affairs. Our distinctively homegrown entertainment programming draws audiences from across the country. Deeply rooted in communities, CBC/Radio-Canada offers diverse content in English, French and eight Indigenous languages. We also deliver content in Spanish, Arabic and Chinese, as well as both official languages, through Radio Canada International (RCI). We are leading the transformation to meet the needs of Canadians in a digital world.