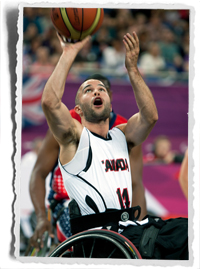 Senior national wheelchair basketball player Tyler Miller will be part of the stage performance at the 2015 Pan/Parapan American Games mascot launch July 17, 2013 at the Canadian Broadcasting Centre in Toronto, Ont.

The mascot will be unveiled in front of thousands of children during KIDS’ CBC DAYS at 2:15 p.m. Rose MacLennan, Olympic and Pan Am gold medalist for trampoline, will also be part of the performance.

A meet and greet with the mascot and the general public will take place from 2:30 p.m. to 3:00 p.m. Interview opportunities with the mascot, athletes and TO2015 representatives will be available at 3:00 p.m. during the media reception.