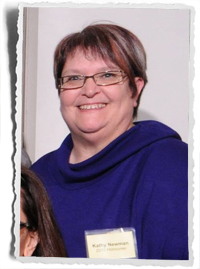 Sport BC presents the award annually to a British Columbian who has contributed to sport in an extraordinary way over an extended period of time. Past winners include wheelchair basketball alumni Rick Hansen (1986) and Terry Fox (1980), as well as John Furlong (1998).

“Over the last 30 years Kathy has been instrumental in the growth and development of wheelchair sports in Canada. Her vision and leadership in the wheelchair sport community and particular to wheelchair basketball have contributed to our organization’s success and reputation as a world leader,” said Wheelchair Basketball Canada Executive Director Wendy Gittens.

Kathy is a most deserving recipient of the Daryl Thompson Award.

“I was overwhelmed when I learned I would be receiving the Sport BC Daryl Thompson Award. I have always admired the winners of this award so I could not believe it! I have spent my whole life involved in sport in one way or another and have learned sport can be such a powerful tool for positive change whether it is building community spirit or improving self esteem,” said Newman.

Newman, who also serves on the Wheelchair Basketball Canada Board of Directors as Vice President of Marketing, and is the Chair of the Competitions Committee for the International Wheelchair Rugby Federation, began working for BCWSA in 1981. She has since been instrumental in bringing a number of groundbreaking events to Canada including the 2010 World Wheelchair Rugby Champions and inaugural Women’s U25 World Wheelchair Basketball Championships. Her efforts and influence also helped establish the Bridging the Gap program, which introduces people with disabilities to wheelchair sports.

In 2006, she was named to the Canadian Association for the Advancement of Women and Sport and Physical Activity’s (CAAWS) Women of Influence list, and awarded the “In Her Footsteps” award, which recognizes significant contributions by women to girls and women in sport in 2010.

About Sport BC’s Athlete of the Year Awards

Sport BC’s Athlete of the Year Awards is the longest standing sport recognition event in the country. Awards in 17 different categories are given each year to athletes, coaches, and officials on their performance and contribution to sport in the province. The awards play a valuable role in nurturing athletic success and recognizing some of BC’s growing talents. For a list of previous award winners and additional information on the 46th Annual Athlete of the Year Awards presented by TELUS, please visit SportBC.com.

Wheelchair basketball is a fast-paced, hard-hitting, competitive sport that has emerged as one of the most competitive and athletic sports played at the Paralympic Games. Our senior national teams are held in high esteem around the world for the elite skill and control that placed them on the podium with a combined five gold and one silver medal in the last five Paralympic Games. For more information, visit: www.wheelchairbasketball.ca.