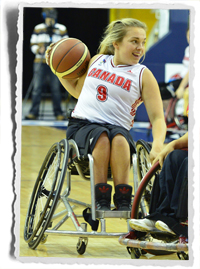 “This will be a tremendous opportunity for these young athletes to continue their development while representing Canada against the world’s best. We have a very competitive team,” said Team Canada Head Coach Ross Norton. “The athletes have worked tremendously hard and we look forward to showing our full potential and improving upon our fourth place finish from the last junior world championship in 2011.”

The team will depart on June 24 to centralize for a training camp in Vancouver before they depart for China where they will take on Australia, Germany, Great Britain, Japan and host China in the round robin.

The IWBF Women’s U25 World Championship round robin games are played between June 30 and July 4, with the semifinals being played on July 5 and the medals games played on July 6. The full competition schedule has not yet been released.

The roster features four returning players from the Canadian squad at the 2011 junior women’s world championship.

The following athletes will be representing Canada (athletes’ city of residence indicated / athletes with Paralympic Games experience denoted with a *):