The Canadian Senior Women’s National Team is amongst the most successful teams in the entire history of Canadian amateur sports. Few Canadian teams, with the exception of hockey and curling, have come close to the amount of success and sheer dominance that the Canadian women have been able to obtain in international competition.

Canada is the only wheelchair basketball team to win three Paralympic gold medals in a row (1992, 1996, and 2000) and four World Championships in a row (1994, 1998, 2002, and 2006). Beginning with their gold medal performance at the Barcelona 1992 Paralympic Games, Canada went on an incredible decade-long undefeated streak in which they established themselves as a perennial favourite at every major international competition, and became one of the most widely respected programs in the world.

Today the Canadian Senior Women’s National Team is highly regarded as a force to be reckoned with, thanks in part to a solid core of veteran leadership and talented newcomers. The team is selected annually to represent Canada in a number of international tournaments and competitions, with the ultimate goal of winning gold at marquee events such as World Championships (held every four years) and the Paralympic Games (held in conjunction with the Olympic Games every four years). 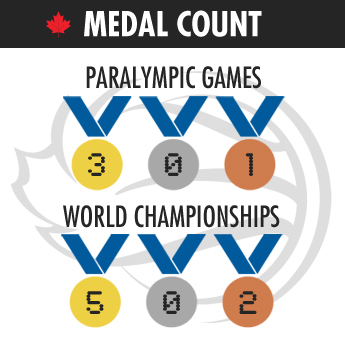