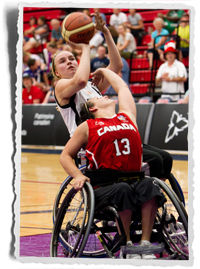 Most individuals watching a wheelchair basketball game become immediately enthralled. Soon however, one question comes to mind: How can athletes of widely differing functional capacities compete fairly against each other?

Classification is the process by which a team’s total functional potential on the court is leveled off with respect to its opponent. It is a functional evaluation taking into consideration each player’s ability to perform skills specific to the sport of wheelchair basketball; wheeling, dribbling, passing, reaction to contact, shooting, rebounding. Each player is then assigned a point value based on their functional ability. That point value determines a player’s classification.

In Canada, classifications are closely based on the international classification system and range from 1.0 to 4.5. Lower class athletes are more limited in their functional skills. Athletes assigned to higher classes have few if any limitations. The total number of points on the court assigned for each of the five players may not exceed 14 points at any one time in most divisions.

Class 1.0 and 2.0 athletes are similar in that neither have control of their sitting base. For example, for most, upper extremity support is required to recover upright sitting after leaning forward to dribble, catch a pass, or make a shot.

Class 1.0 athletes are generally unable to move their trunk in any of the planes of movement. For example, most are unable to rotate their upper body to receive an over the shoulders pass in a fast break.

Class 2.0 athletes are generally able to rotate their upper body without using their arms for support. This greatly improves their ability to scan the court, as well as receive or shoot the ball from different directions.

Class 3.0 and 4.0 athletes are similar in that they both have control of their sitting base.

Class 3.0 athletes are generally able to turn their shoulders as well as lean forward without difficulty. They can dribble the ball far off the front of the wheelchair for example. They, however, cannot lean to the sides and return to upright without using their arms as an assist; most class 3.0 athletes lack the leg power necessary to perform such an action.

Class 4.0 athletes are able to move their trunk in all planes of movement. They can rotate, lean forward and to at least one side without difficulty. Athletes in this category can lean to the side to contest a shot or protect the ball from an opponent or catch a rebound. Class 4.0 athletes differ from class 4.5 athletes in that they often are not able to lean equally to both sides due to limited power in one leg.

One can get a feel of what it feels like to be a class 1.0 or 2.0 athlete by attempting to hold the knees together and up while sitting in a chair. In this position, leaning forward or sideways is nearly impossible. The only possible movement is shoulder rotation.

One can get a feel of what it feels like to be a class 3.0 athlete by pressing the knees together while sitting in a chair. Leaning forward and turning the trunk to look over the shoulder will be easily accomplished; leaning to the side to pick up an item off the floor will be difficult if not impossible to carry out.

Occasionally, an athlete displays characteristics of two classes. In these instances a .5 class may be assigned.

Classifiers are certified technical officials whose role is to evaluate and assign players to a classification. Classifiers are a group of individuals familiar to the sport. Medical training is not necessary.

For more information on classification or how to become a certified classifier, please contact the Wheelchair Basketball Canada national office.