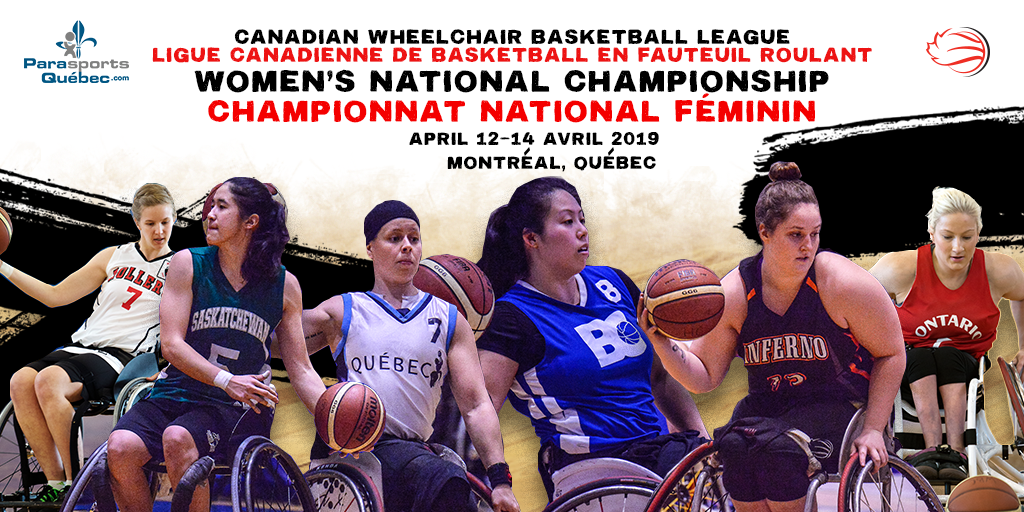 (MONTREAL, QUE.) Six of the best women’s wheelchair basketball club teams in Canada descend on the Centre sportif at the Université du Québec à Montréal (UQAM) April 12-14 in pursuit of the national title. The 2019 Canadian Wheelchair Basketball League (CWBL) Women’s National Championship is the top women’s wheelchair basketball club event in Canada and is open to athletes with and without a disability. Some of Canada’s top Paralympians and Team Canada hopefuls will compete alongside elite able-bodied players in a battle for the national championship crown that is sure to thrill spectators.

Media and fans are welcome to come experience the pure speed, skill and impact that make wheelchair basketball a fan favourite and the most popular sport in the world for athletes with a disability. Competition begins at 8 a.m. ET on Friday April 12 and concludes with the bronze and gold medal games starting at 9 a.m. ET on Sunday April 14.

Paralympians Cindy Ouellet, Maude Jacques and Rosalie Lalonde and the rest of team Quebec will welcome the B.C. Breakers, the defending champion Edmonton Inferno, the Calgary Rollers, and teams Ontario and Saskatchewan to the competition in Montreal.

The tournament features current and future stars and notable alumnae from the Canadian Women’s National Team, including several hopefuls to represent Canada at the upcoming Tokyo 2020 Paralympic Games. The competition is also inclusive, as athletes with a disability and able-bodied athletes compete together on a level playing field.

The event is hosted by Parasports Québec.

Who: Paralympians Cindy Ouellet (Quebec City), Maude Jacques (Lac-Beauport) and
Rosalie Lalonde (Saint-Clet) and the rest of team Quebec welcome the top
women’s club teams in Canada in a quest for the national championship title.