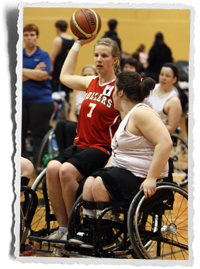 (Montreal, Que.) …The Calgary Rollers and the Edmonton Inferno were both victorious as the 2013 Canadian Wheelchair Basketball League (CWBL) Women’s Championship got underway Friday evening at the Collège Édouard-Montpetit in Longueuil, Que.

The defending silver medallist Calgary Rollers defeated Ontario by a score of 66-33 to start the tournament at 1-0.

The Edmonton Inferno began its quest for gold with a 63-40 win over Saskatchewan in the other opening match of the competition.

Tournament action resumes at 8 a.m. Saturday when the hometown favourites from Quebec tip off against Ontario. The Quebec side features Team Canada athletes and Paralympians Cindy Ouellet, of Quebec City, Maude Jacques, of Sainte-Catherine, and Montreal native Elaine Allard.

The 2013 CWBL Women’s Championship is being held in conjunction with the Défi sportif AlterGo. The top six competitive women’s club teams in Canada are vying for the national championship title.