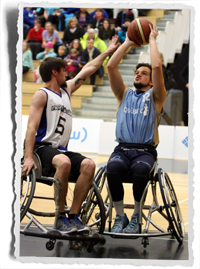 Quebec and Alberta both have two wins as they battle for top position in Pool A. Saskatchewan sits atop Pool B with a 3-0 record following victories over host Team B.C. and Manitoba. Team P.E.I. is currently is second place in Pool B with a 2-0 record.

All nine participating teams are in action on Wednesday as the preliminary round continues. The semifinals are set for Thursday while the medal games will take place on Friday, February 20, 2015.

Team Sask started off the day on a high note, defeating Team Manitoba 62-6 in the opening game of day 2 action at Duchess Park Secondary School. Saskatchewan shot 51.4 per cent from the floor to take the 36-4 lead at halftime. Team Sask scored 38 points off the bench as each player saw court time. Regina native Shelby Harrower scored a team-high 14 points for Saskatchewan. Kurtis Wiens, of LaSalle, Man., led Team Toba with 4 points.

Team Alberta earned a spot in the semifinals with a 70-35 win over New Brunswick. Alberta doubled up on New Brunswick, 14-7, in the opening quarter and kept the pedal down in the second frame en route to a 33-13 advantage at halftime. Team NB pushed back in the third quarter, but Alberta posted 21 points in the final frame to seal the victory. Alberta capitalized on opposition turnovers to score 26 points compared to 6 for Team New Brunswick. Bradon Doll, of Camrose, Alta., led all Alberta players with 25 points and 11 rebounds to earn the double-double. Saint John native Sean Wilson dropped a team-high 11 points for the New Brunswick side.

Team P.E.I. held onto the 65-57 win over Ontario in a back-and-forth, physical contest. The teams were deadlocked 28-28 at halftime. The third quarter solved nothing as the clubs entered the final frame tied at 42 apiece. Team P.E.I. pulled away in the last quarter on the strength of some clutch shooting. The duo of Liam Hickey, of St. John’s, Nfld., and Jeremy Watts, of Charlottetown, P.E.I. were forces to be reckoned with. Hickey posted 29 points, 17 rebounds and 10 assists for the triple-double, while Watts had a double-double with 27 points and 11 rebounds. Kevin Wakeling, of Pefferlaw, Ont., was Team Ontario’s top point producer with 14 points and 15 rebounds for the double-double. Ottawa native Emilie Mondor added 12 points for Ontario.

Team Quebec improved its record to 2-0 and secured a place in the semifinals with a 77-23 victory over Team Nova Scotia. Quebec overmatched Nova Scotia and delivered a balanced offensive attack as all 12 players contributed on the scoreboard. Laval native Benjamin Palmer produced a team-high 16 points for Quebec. Ben Power, of Cole Harbour, N.S., collected a team-leading six points and six rebounds for Team Nova Scotia.

Team Saskatchewan defeated host British Columbia in front of a thundering crowd of supporters in the final match of the day. The top-ranked Saskatchewan team drew blood early en route to a 43-18 lead at halftime and never looked back. Nik Goncin, of Regina, scored a team-high 19 points for Saskatchewan. Ben Hamilton, of Surrey, B.C., picked up the double-double on the strength of a team-high 15 points and 11 rebounds for Team B.C. Team Sask advanced to the semifinals with the win and moved closer to locking down top spot in Pool B. Team B.C. will try to rebound in its final preliminary round match against Ontario.