Are You Ready? Toronto 2015 Parapan Am Games Tickets On Sale March 23rd

(Toronto, Ont.) Up for grabs for the first time, sports fans will soon be able to buy their tickets for the Toronto 2015 Parapan Am Games and catch the best athletes compete for a medal and the chance to represent their country at the Rio 2016 Paralympic Games.

Tickets for the Toronto 2015 Parapan Am Games go on sale March 23 at 1 p.m. (ET) at www.toronto2015.org/tickets. Popular events such as athletics, swimming, wheelchair basketball and wheelchair rugby are expected to draw big crowds. The Parapan Am Games take place from August 7 to 15, 2015.

“We’re extremely proud and excited that the Toronto 2015 Parapan Am Games will be historic – the largest ever,” said Saäd Rafi, chief executive officer, Toronto 2015 Pan Am/Parapan Am Games Organizing Committee (TO2015). “I’ve met many athletes and I’ve heard their personal stories, and I think seeing these athletes live and up close this summer will change the way people think about sport.”

This will be the fifth edition of the Parapan Am Games and will feature more than 1,600 athletes from 28 countries competing in 15 sports – more athletes, sports and countries than any Parapan Games in history. In addition, and for the first time, all sports will be qualifying events for the Rio 2016 Paralympic Games.

“The Canadian Paralympic Committee has set the goal of finishing in the top three in the medal count,” said Team Canada’s chef de mission Elisabeth Walker-Young. “Our Canadian athletes are focused on their final preparations towards confirming their name to our 2015 Parapan Team roster. For most, the Parapan Games will be a once-in-a-lifetime opportunity to compete at an elite level on home soil, in front of home crowd spectators. The ticket holders should prepare themselves for magical, intens 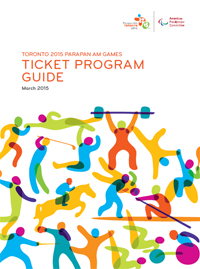 Team Canada is a powerhouse in many of the sports being contested in August. In wheelchair basketball, Canada’s women’s team won the 2014 World Championship in Toronto, while Canada’s men’s team won gold at the London 2012 Paralympic Games. Canada came second in the medal count in track cycling at the Guadalajara 2011 Parapan Am Games, with three gold and one silver.

Some athletes, including swimming star Benoît Huot, can’t wait for the rare opportunity to compete at home and face their top rivals. Huot recently relocated to Toronto to train in the brand new CIBC Pan Am/Parapan Am Aquatics Centre and Field House hoping it will give him an advantage.

“I have travelled the world to compete against the best athletes striving to hear O Canada. But I get goose bumps just thinking about doing that at home in Toronto this summer feeding off the energy of the crowd,” 19-time Paralympic medallist Huot says.

The Toronto 2015 Parapan Am Games ticket program is designed to be affordable and accessible for everyone by offering:

The Toronto 2015 Pan Am/Parapan Am Games Organizing Committee (TO2015) is tasked with managing and delivering the Games. It is working to bring some of the world’s best athletes and artists to Toronto and the Greater Golden Horseshoe region, giving Ontarians a unique chance to be part of the action, and making the region a hub for sport.