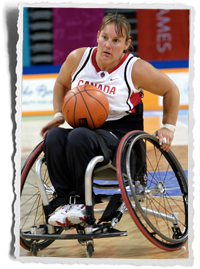 Two members of the Sr. Women’s National Team are set to participate in a leg of the relay that marks twenty-five years since Rick Hansen embarked on his Man in Motion World Tour.

Marni Abbott-Peter – a three-time Paralympic gold medallist and current assistant coach of the Sr. Women’s National Team – will be wheeling her leg of the Relay in Port Coquitlam, BC, where humanitarian, athlete, and Canadian icon Terry Fox was raised.

Abbott-Peter’s leg starts shortly before 3:30 PM PDT on Mary Hill Road, and she will be followed minutes later by Vancouver native Janet McLachlan, a member of the Sr. Women’s National Team and 2011 Wheelchair Basketball Canada Female Athlete of the Year.

Both women are in their home province of British Columbia preparing for the 2012 National Wheelchair Basketball Championships, held from May 18-20 in Richmond. 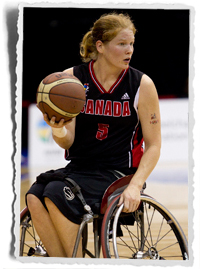 Abbott-Peter and McLachlan exemplify what it means to be a Rick Hansen Medal-Bearer. Focused on engaging Canadians to take up the challenge and become catalysts for positive change, the Relay features thousands of Medal-Bearers who, like Abbott-Peter and McLachlan, will run, walk, wheel or bike and complete their segments through a variety of forms of movement for all abilities.

Abbott-Peter and McLachlan’s participation in the Relay ties in well with one of the themes of the 2012 National Championships – the tournament will celebrate “Difference Makers” in the sport of wheelchair basketball in honour of the 25th anniversary of the Man in Motion World Tour.

The Rick Hansen 25th Anniversary Relay will make its way to the Richmond Oval on Sunday, May 20, 2012 for a special public celebration following the championship games.

Beginning on Aug. 24, 2011 in Cape Spear, Newfoundland and Labrador – the easternmost point in North America and approximately 15 kilometres south-east of St. John’s – the 25th Anniversary Relay is retracing the Canadian segment of the original Tour, but this time one man in motion will be represented and celebrated by many in motion; engaging 7,000 participants from across Canada who have made their own difference in the lives of others. The Relay will travel through more than 600 communities as it makes its nine-month, 12,000-kilometre journey across Canada before concluding in Vancouver on May 22, 2012. For more information, please visit www.rickhansenrelay.com.