The BC Wheelchair Basketball Society is hosting the 2018 CWBL Women’s National Championship April 6-8, 2018 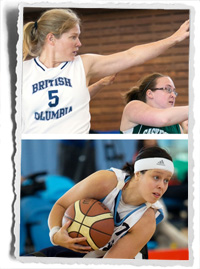 (Vancouver, B.C.) The 2018 CWBL Women’s National Championship tournament is scheduled for later this week at the Richmond Oval in Vancouver, B.C. The best female athletes from B.C., Alberta, Saskatchewan, and Quebec are competing for the title of national champion.

The Canadian Wheelchair Basketball League features wheelchair basketball club teams from across Canada and culminates each season with a national championship. The league is fully integrated welcoming athletes with a disability as well as able-bodied athletes to play in the spirit of competition. It features some of the country’s best wheelchair basketball players, including past, present and future members of Team Canada.

Spectators and local media are invited to attend the tournament. Media can capture visuals during the games and athletes and coaches will be available for post-game interviews. The gold medal game will take place on April 8 at 11:30a.m. PDT. The full schedule can be found here.

Who: BC Breakers, Edmonton Inferno, Team Saskatchewan and Team Quebec