(Coquitlam, BC) The BC Wheelchair Basketball Society (BCWBS) celebrated the achievements of its athletes, coaches, officials, volunteers and partners at its annual awards night on March 2, 2013 in Coquitlam, BC.

Official of the Year: Jim Campbell

Jim has been a dedicated official in Kamloops since 1995. Not only has he traveled across BC to referee, but he also recruits and mentors new officials at home. Jim’s connections with the school district were crucial in helping the Kamloops Bull-Dawgs secure school gym space for their tournaments. Although Jim has had to take a step back in 2012 for health reasons, his dedication to wheelchair basketball remains unchanged and he still devoted countless hours towards ensuring the success of Kamloops’ Division Two tournament.

Coach of the Year: Joe Higgins

It’s hard to find a more tireless builder of wheelchair basketball in BC (or possibly the world) than Joe Higgins. His dedication to recruiting, developing and mentoring new athletes and coaches is unsurpassed, as is his passion for the sport. He’s been involved in countless new initiatives over the past few years, including the West Coast Classic, Breakfast Club, the Okanagan Jamboree and many, many more. Whether it’s holding early morning practices, picking players up from the ferry, or visiting an athlete to provide one-on-one support, Joe constantly gives everything he has to help the people around him succeed.

Our Outstanding Community Support award goes to the Pacific Institute for Sport Excellence, also called PISE. Last season, PISE stepped in to help the Victoria Wheelchair Sports Association get much-needed gym space. Not only did they provide a reduced rate, but they also offered wheelchair equipment storage onsite and worked hard to accommodate the athletes’ needs. This partnership expanded when PISE created an adapted strength and conditioning program at no cost to VWSA athletes, going so far as to bring in specialist Steve Ramsbottom to train their trainers. Thanks to their connections with Camosun College, PISE also helped VWSA to find, train and retain volunteers. In September 2012, PISE started a community wheelchair basketball program in coordination with VWSA, providing even more sports opportunities to Victoria residents. Thank you to PISE for their partnership, their proactive ideas, and their commitment to helping Island residents experience the same benefits of wheelchair sports as their peers in the Lower Mainland.

Volunteer of the Year – Mitch Kosterman

Mitch Kosterman came to wheelchair basketball when his son Jack acquired a disability. Through the years, he’s become an enthusiastic volunteer who’s always willing to pitch in when needed. Two summers ago, Mitch started a junior program in Langley called the Langley Gold Rush. The program has grown by leaps and bounds, thanks to Mitch’s willingness to promote the sport through school and community demos and to connect with the families of young people with disabilities. This year, the Gold Rush partnered with the Chilliwack Cheetahs to meet several times for fun games.

As most of you know, Erin Higgins has been a wheelchair sports fan almost since she was born. It wasn’t until she became a teenager, however, that she fell in love with wheelchair basketball at the Tim Frick City League and became a regular participant. Thanks to her intelligence and hard work, Erin has made huge strides in her game in recent years. She played a key role at the 2011 Canada Games, and performed tremendously on the young Division 2 Breakers’ team. Last year, Erin became the youngest player on the senior provincial team and made an impact at nationals, helping the team to bring home a gold medal. Despite her high-performance successes, she still made time for City League, where she mentored up-and-coming athletes and proved herself to be a team leader.

Female Athlete of the Year – Wendy Jansen, Kelowna BC

Though she is a long-time wheelchair basketball participant, Wendy Jansen had an outstanding 2011-2012 season. Not only did her performance on the Okanagan Thunder earn her an All Star nomination in the 2012 BC CWBL Division 2 Finals, but she was also a key member of the BC Breakers this year. Due to her dedication to the sport, she attended all camps and competitions, even though it meant commuting from Kelowna to the Lower Mainland several times. All of her hard work paid off during the 2012 National Championships, when her consistent outside shooting percentages and tenacious defence were crucial in the Breakers’ gold medal finish. 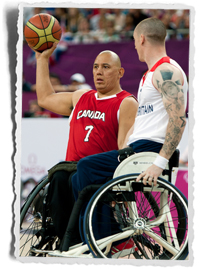 This year, Richard “Bear” Peter wrapped up a truly extraordinary career. After spending 18 years with Team Canada — winning three Paralympic Gold medals and one World Championship title – Bear saved his best for last during the gold medal game of the London 2012 Paralympics. Not only was he second in scoring for the team (with 10 points), but his veteran leadership and clutch defense were crucial in Canada’s gold medal win over Australia. Back at home, Bear continued to be a key contributor with Team BC, helping them to win the silver medal at the National Championships. He capped off this impressive season by winning both a National Aboriginal Achievement Award and a Queen Elizabeth II Diamond Jubilee Medal for his athletic achievements.

Bryan has been a leader both on the court and as a volunteer in the BCWBS community for many years. Thanks to his dedication, he has progressed from a recreational athlete to a high-performance athlete who participates in numerous BeSquad events, high performance camps, Division 1 leagues and even the men’s provincial team. His leadership style and his friendly demeanor have not gone unnoticed, and his commitment to the Okanagan Thunder has been instrumental in keeping wheelchair basketball alive in Kelowna. This year, Bryan took his commitment to the next level by joining the BCWBS Board of Directors. For his willingness to lead and grow the game of wheelchair basketball, and his dedication as a BCWBS athlete, Bryan is remniscient of our good friend MJ, which makes him an excellent recipient of this year’s award.

The BCWBS award ceremony was part of the festivities over the weekend during the BC division finals of the Canadian Wheelchair Basketball (CWBL). The Douglas College Royals claimed the division 1 title, while the Tacoma Titans won the division 2 honours.

To get involved or learn more about BCWBS events and programs, please visit www.bcwbs.ca.

About BC Wheelchair Basketball Society

The BC Wheelchair Basketball Society (BCWBS) is a non-profit organization, formed in 1983 and registered with Revenue Canada as a charity since 1985. Since its inception, the society has been a catalyst in creating awareness about disability issues and has provided support to wheelchair basketball programs throughout British Columbia. Our programs are offered to people who have physical disabilities and people who do not, and to all age groups. Wheelchair basketball is for anyone who wishes to participate.