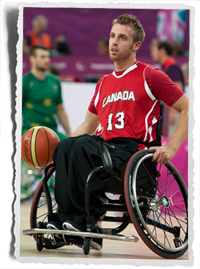 Burlington-native Brandon Wagner has been named male parasport athlete of the year for 2013 by the Burlington Sport Alliance.

Wagner was recruited to play wheelchair basketball for the Burlington Vipers in 2003, rising to the national level in 2005 with the Men’s U23 team. He became a member of the Sr. Men’s National Team in 2009 and won a gold medal in 2012 at his first Paralympic Games in London, England, helping Canada to defeat Australia 64-58.

Wagner previously played for the University of Illinois, winning a U.S. collegiate championship in 2008 and was named student athlete of the year in 2009. He also helped the men’s provincial team win three Canadian Championships.