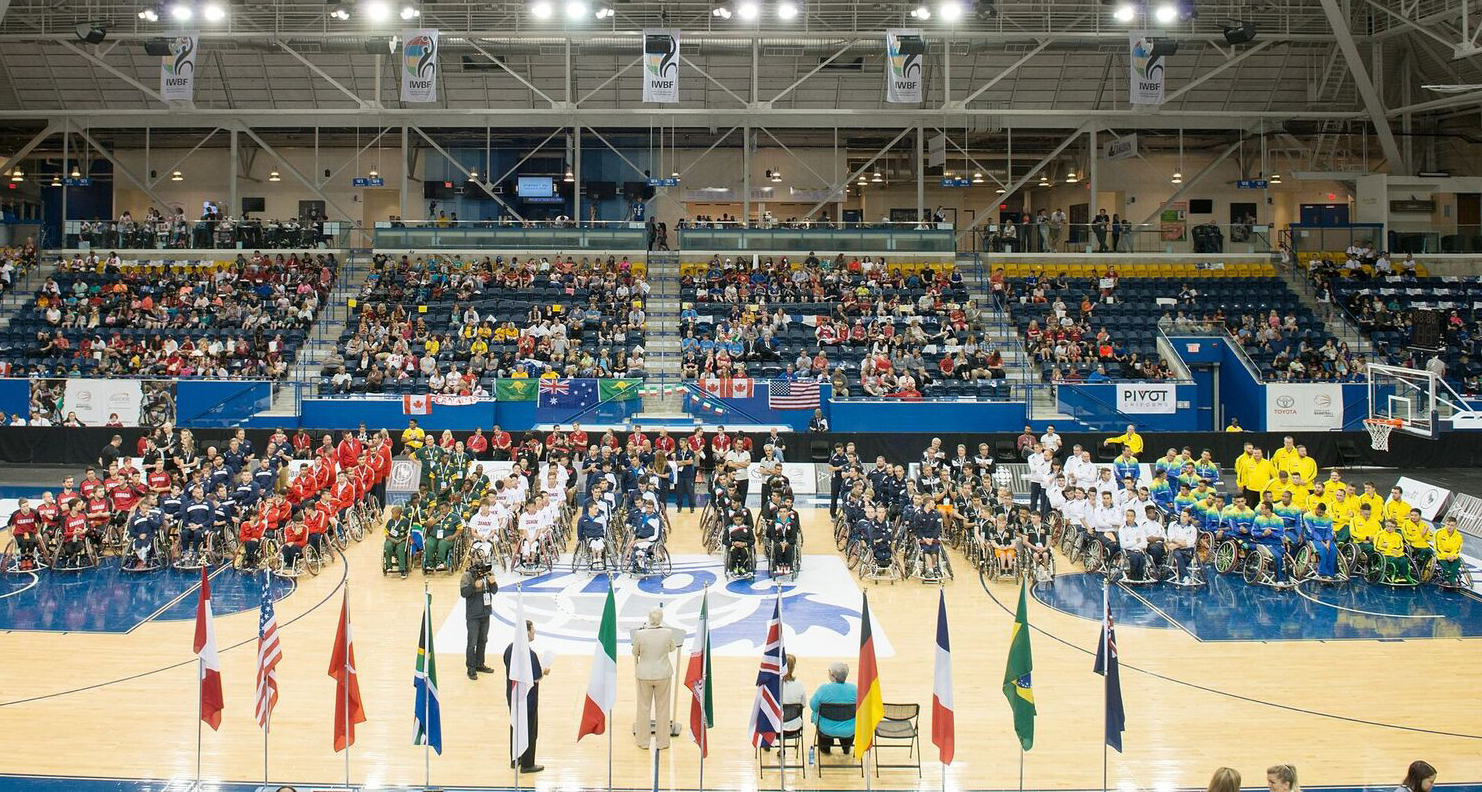 (Toronto, Ont.) The future of wheelchair basketball looks very bright as the next generation of stars representing 12 national teams hit the hardcourt in front of an energetic, sellout crowd on Thursday for the official opening of the world championship for junior men at the Mattamy Athletic Centre in Toronto.

“It is my great pleasure to be here for the return of the Men’s U23 World Championships, where it all began 20 years ago,” said IWBF Secretary General Maureen Orchard. “At that time, I was president of Wheelchair Basketball Canada and since then it’s been a privilege to be able to witness the tremendous growth of junior programs across the world for our sport. We have gone from seven countries participating to now having over 40 countries throughout the zones attempting to qualify for the 12 spaces available.

“This is a real showcase for our young talented wheelchair basketball athletes across the world and I am in no doubt we are set for some high-quality action. In the first ever U23 World Championships, we saw some of the best players to ever grace the court of wheelchair basketball emerge such as Patrick Anderson and Troy Sachs, to name just a couple, and I’m sure we will have the delight in seeing similar exciting talent surface here.”

The hometown Canadian side is in pursuit of a third podium finish at the world championship, having captured back-to-back gold medals in 1997 and 2001. The event returns to Toronto in time to mark the 20-year anniversary since Canada hosted and won the inaugural world championship for junior men in Toronto in 1997.

“We are honoured to welcome the finest junior male athletes in the sport to Toronto as we host this international celebration of wheelchair basketball and showcase the abilities of these elite athletes to Canadians and the world,” said Wheelchair Basketball Canada President Steve Bach. “As a world leader in our sport, we welcome the opportunity to build lasting legacies that contribute to the ongoing growth and development of the game.”

“For the next eight days, Wheelchair Basketball Canada will host the best men’s junior wheelchair basketball players in the world, making the U23 World Wheelchair Basketball Championship in Toronto a truly world-class event,” said the Honourable Carla Qualtrough, Minister of Sport and Persons with Disabilities. “As they compete, athletes from 12 different countries will showcase the incredible skill and talent involved in wheelchair basketball. This event is sure to inspire young Canadians to pick up a ball, regardless of their physical abilities. I encourage everyone to cheer on Team Canada, in person or on social media, and get inspired.”

“National championships, like the 2017 Men’s U23 World Wheelchair Basketball Championship, provide Ontario’s amateur athletes with the opportunity to showcase their ability, shine on the world stage and inspire the next generation of competitors,” said the Honourable Eleanor McMahon, Minister of Tourism, Culture and Sport. “I am proud of our government’s support for this international event through the Ontario Sport Hosting Program, which is helping communities across the province to host events, spark economic activities and leave lasting legacies for years to come.”

Fans in Canada and around the world are invited to experience sport that moves them to the edge of their seats as they witness the elite skills and athleticism that make wheelchair basketball a highly competitive and exciting spectator sport.

All 42 games of the competition will be webcast live online through the official tournament website at www.2017u23wwbc.com. Tickets are also on sale online and at the Mattamy Athletic Centre box office.