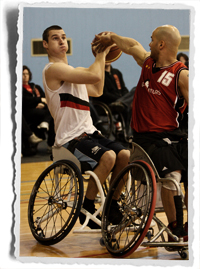 “The CWBL National Championship is a prestigious event and we’re thrilled to see it come to the City of Burlington for the first time in history,” said Wheelchair Basketball Canada Executive Director Wendy Gittens.

The tournament features competitive club teams from across Canada as they compete for the title of national champion and includes past, present, and future athletes with the Canadian National Team program.

“We’re thrilled to have a high-caliber national sporting event in our new, accessible Haber Recreation Centre,” said Burlington Mayor Rick Goldring. “We hope this is the first of many tournaments we host in partnership with Wheelchair Basketball Canada, and we’re proud that they chose Burlington as the host city for this prestigious event.”

The CWBL National Championship is the premiere event on the annual domestic wheelchair basketball calendar in Canada. The tournament also plays host to the Wheelchair Basketball Canada annual awards banquet.

The Canadian Wheelchair Basketball League (CWBL) was founded in 1986 and has two primary divisions: the open division and the women’s division. The league features wheelchair basketball club teams from across Canada and culminates each season with a national championship for each division.