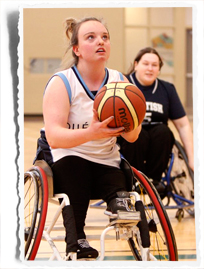 (Burlington, Ont.) The Calgary Rollers and Quebec emerge unscathed after the round robin action at the women’s national title in Burlington.

Five of the country’s top competitive club teams are vying for a shot at the women’s national title at the Haber Recreation Centre.

The competition resumes Saturday as teams jostle for position and battle for a berth to the medal games. The bronze and gold medal games are set for 9 a.m. ET and 11 a.m. ET, respectively, on Sunday.

Quebec started the day off with a 61-36 win over host team Ontario. After claiming an early lead in the first, the Quebec team maintained their momentum and with a solid defense and shut down Ontario’s attempts to catch up. Team Canada veterans Cindy Ouellet and Rosalie Lalonde tallied 22 and 19 points, respectively, for Quebec, while Christina Swett and Paralympian Tamara Steeves countered with 13 points each for Ontario.

In the battle of Alberta, the Calgary Rollers found their first win of the tournament against the Edmonton Inferno. With a powerful offensive push Calgary was able to set the pace and take had a 30-17 lead by half. Edmonton returned to the court determined to shrink their deficit and were able to outscore Calgary in the third to make it a two point game in the fourth. Calgary fought off the rebuttal and finished with a 54-46 win. Edmonton’s Arinn Young led all the players with 24 points while Erica Gavel countered with 21 points for Calgary.

In their second game of the tournament, Quebec defeated the BC Breakers 67-53 after an intense match up. After setting a strong pace in the first half Quebec lost some momentum in the third quarter allowing BC to come within one point of their lead. BC was unable to push ahead against the full court pressure of their opponents as Quebec ramped up their defense and ultimately took the win. Cindy Ouellet of Quebec and Kady Dandeneau of BC led their teams in scoring, both collecting 21 points.

“We are playing very good basketball and our defense is playing very well, we nourish our offense with our defense,” said assistant coach of Team Quebec, Jason Eng.  “Against BC we were playing too slow, not aggressive enough, so we talked to our players to bring up the intensity and I think intensity was the key. I think the tournament is just going to keep getting better and better as we’re going to play against taller and more experienced teams.”

Edmonton picked up a decisive 71-57 win after a back and forth battle against Saskatchewan to secure their first win of the tournament. The teams traded one point leads throughout the first but a stronger showing by the Saskatchewan offense brought their team ahead to 37-30 by half. Edmonton, unrelenting in their attack, managed to turn things around and tied the game 48-48 at the end of the third. Finishing the game with a strong defense, Edmonton easily countered Saskatchewan to pick up the win. Edmonton’s Arinn Young produced a team-best 39 points and Shelby Harrower registered 22 points for Saskatchewan.

The BC Breakers entered the win column after a tight game against Team Ontario. Both teams struggled to find momentum after tip-off, going shot for shot. Ontario was first to claw their way to a five point lead with just a minute remaining in the first half. Led by a strong offense in the second half from Kady Dadeneau and Ryleigh Bissenden, BC turned the tide and outscored Ontario 31-18 in the second half to claim their 52-44 victory. Kady and Ryleigh paced BC’s offense with 19 points each while Tamara Steeves of Ontario tallied a team high of 18 points.

With a commanding 76-58 win against Saskatchewan, the Calgary Rollers have booked their tickets to the semi-finals. Calgary brought a strong performance against the Saskatchewan team and consistent shooting allowed them to maintain their lead throughout the game. Shelby Harrower led Saskatchewan players with 22 points, while Erica Gavel countered with a game-high 38 points for Calgary.

“We’ve been playing really good, disciplined ball with good defense,” said Calgary’s Kendra Ohama. “Everybody on our team has got some really good inside-outside game and all we have to do is capitalize on that. We just have to keep doing what we’re doing by playing hard defense and looking for those open shots. We’re not a new team so it’s nice to put a lot of that knowledge into the game.”